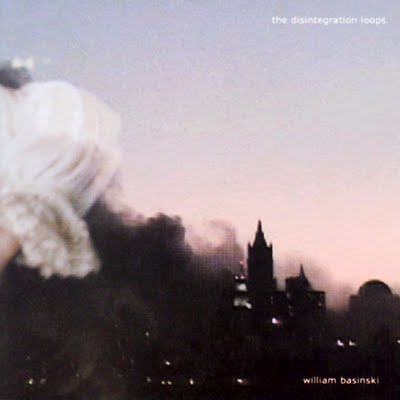 1. D|P 1.1 (1:03:33)
2. D|P 2.1 (10:56)
It’s an often overlooked fact that as soon as we come into existence, as soon as we take that first breath of air into our lungs, our body mechanics begin the inexorable march towards blissful oblivion. Every year we grow older is a celebration that our mortal coils are not as flawless nor efficient as they used to be. Until now, I have not come across a better musical metaphor for a subject that everyone should be accustomed with, yet also a subject that most people shun to the point of paralysing fear: Death.
The story behind William Basinski’s Disintegration Loops is both interesting and compelling. The ambient and minimalist multi-instrumentalist was attempting to salvage some earlier recordings from 1982 that had been initially laid down on magnetic tape. As Basinski began the process to digitise the recordings it became clear that the physical quality of the tape had greatly detiorated over the twenty years of inactivity. As the reel passed the read/write head, pieces of tape would disintegrate and fall off. The result of this unexpected fault led to the track transforming over a long period of time to a point where eventually the track seems to be in death throws, sounding like a meek shadow of its former self until nothing more can be heard.
This is a popular album in the blog scene, but seeing as we have our own growing group of followers that may not have come across this work I thought I’d post it. Be warned though, if you have no interest in incredibly minimalist or ambient (in the correct usage of the term) music you probably won’t enjoy this. But by all means, stick it on while you’re reading, studying or working and it’s pretty much perfect. I find it quite moving and I hope you do too :).
Get Now//William Basinski
EDIT: I’d also like to add that this is only the first volume out of four, so if you’re interested in hearing more let us know.
ambientminimalism