In a world where essential truths are hidden, obscured by our imperfect inferential machinery, and further obscured by those who wish to exploit them, the search for purity can be a long, frustrating one.

There is a pattern evident as an artist first takes their fledgling flights into the public eye.  First they are ignored, then shunned, then actively resisted, and finally, embraced: sucked into the media machine, stripped of all their originality, talent, voice and sound, hung out to dry whilst these attributes are commodified, categorised, compounded to form the mould called a ‘genre’.  Until a fickle audience becomes bored by the stream of acts pressed ill-fittingly into the mould and passed of under the guise of variety, the artistic merits of the pioneer’s vision are pillaged, left bare:  a figure-head martyr shamed by their ill-begotten legacy.

As an increasingly fickle audience becomes ever harder to please, and true talent treads a safe distance from the mainstream, a beleagured record-industry can be seen hopelessly mashing together old archived genre-moulds in a desperate attempt to convince the world that they are fostering original new talent.

Away from the cynicism of commercial co-opting of art, cross-fertilisation between different artists, bands, sounds or ideas can yield the most natural refreshing music around.
Dove’s 2004 self-titled debut and only album has its moments reminiscent of hardcore, doom, sludge and stoner metal, effortlessly blended, and free of the radical posturing, faux-occultism, self-righteous bombast and creative drought too often a factor in the aforementioned scenes.

Hidden from the mainstream gravity-machine, a chance aggregation of musicians from commonly disparate ventures actually worked, and stayed hidden long enough not to be spoiled. 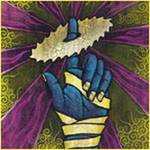