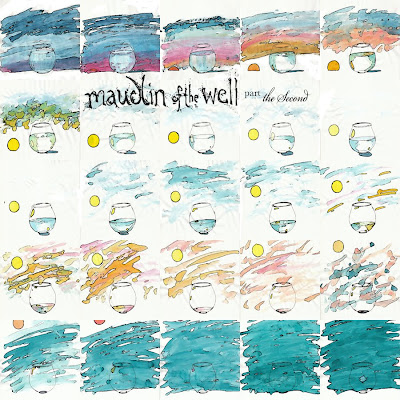 As another year draws to a close and every blog emerges with it’s own numerary summation of the year past, here at lurker HQ, where art is judged purely on merit, where reputation counts for nothing, we are slightly more stringent in our opinions.  A top ten?  Why not a top 8 or top 17?  Why not rank everything which occurred in the past year in order?
Or we could stop squabling over the relative subjective merits of one product of artistic endeavour over another, and instead focus entirely on the positive, and show our support for a piece of music which has made the years lows bearable, its highs even higher, and shifted our perceptions of what it is possible to acheive with music.
maudlin of the Well – Part The Second
Forming in 1996 and splitting in 2001, the short three year period between their 1999 debut (My Fruit Psychobells… A Seed Combustible) and the 2001 swan-song companion albums (Bath/Leaving Your Body Map), Toby Driver’s troupe showed so much promise and stood so squarely in face of bland metal traditionalism, that their albums are still a point of contention to this day, as they rise slowly out of obscurity.
2009 saw the reunion, quiet and without undue ceremony, and an album was recorded under the sole-funding of a few well-wishing believers, and self-released through the band’s website, for everyone, for free.
Moving further from the stylistic trappings of the metal world, incorporating greater instrumentation and more complex composition, they moved out of the metal-ghetto and went it alone, producing an album so multi-faceted and complex, airy and dream-like that any comparisons to metal become purely symbolic.  Such a successful transposition of Driver’s immense compositional skill from the near avant-garde death metal of earlier releases to the delicate, emotional progressive rock of Part the Second should be hailed as a huge achievement not only to himself and his surly companions, but also to the fans that made this work possible.
The songs range from the quiet minimalist approach of Excerpt from 6,000,000,000,000 Miles Before the First, or, the Revisitation of the Blue Ghost to a harrowing brush with jazz fusion guitar licks in Clover Garland Island on to the avant-metal swagger of Laboratories of the Invisible World (Rollerskating the Cosmic Palmistric Postborder). However, the overall sound of the album compares more to maudlin of the Well’s sequel band, Kayo Dot who specialise in dissonance, bizarre rhythms and blissed-out atmospherics while still maintaining the unique melodicism of the band’s earlier incarnation. Each piece complements the other perfectly and there is not a single flawed, out of place moment on this album.
To be honest, I find it very hard to write about an album that has meant so much all of us this past year (The most excellentsword took over this half-written article when Slicedmind went to see his misses for New Year). Don’t be put off by the excessive song titles, Mr. Driver is an eccentric gentleman to say the least. I like to think that it’s this excess and refusal to create anything at all derivative that has enabled him to become one of the most relevant and enjoyable composers of modern times. I’ll just shut up and let you get on with clicking that link at the bottom.
Kayo Dot/maudlin of the Well for life. Long live Toby Driver and his glorious music!
1.Excerpt from 6,000,000,000,000 Miles Before the First, or, the Revisitation of the Blue Ghost
2. Another Excerpt: Keep Light Near You, Even When Dying
3. Rose Quartz Turning to Glass
4. Clover Garland Island
5. Laboratories of the Invisible World (Rollerskating the Cosmic Palmistric Postborder)
Get It
progressive metal