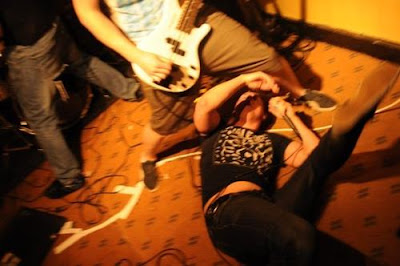 So here’s another one of those posts where I attempt to promote a band of personal friends. Worry not, if they were shit I’d tell them they’re shit and they wouldn’t appear on this blog. However, this time round I’m going to let a friend write this one. Or rather I’m just copy-pasting straight from his blog, Segue. He is a true wordsmith and is in the process of scripting a comic book serial titled Hell’s Own so go and peruse the literary goodies he’s strewn across his little space on the web.
The band in question are AZWAI or Aszerosweareinfinite. You decide. I don’t think the guys are all that assed about it. Anyway they’re all sweethearts and number among my best of friends! As usual the download links are at the bottom of the post if it interests you. Without further ado, the words of Chris Grenville:
“It’s a good feeling when something you’ve been working on for a long time comes to fruition. After months of hard slog for very little gain, you might finally feel as if it has all been worth it, and you can allow yourself a pat on the back and maybe a few drinks down the pub. For Malvern-based hardcore quartet AsZerosWeAreInfinite, or AZWAI as they are more colloquially known, that drink should be at least three fingers, and the hand should belong to a big sweaty gorilla.
You see, their self-titled EP was recorded over a year ago, but only now do you, the lucky public, get to sample the fruits of their labour.
The opener, ‘A God By Any Other Name’, kicks in with the lyrics “between my crooked teeth and self-prophesied lies, you will discover salvation for your ache”. This could be as much a comment from anybody who has found their way to the front of the stage during one of AZWAI’s shows as it is about the actual subject, one Wayne Bent. Bent, also known as Michael Travesser, is the charismatic leader of the Lord Our Righteousness Church in New Mexico, a religious community who were featured in the Channel 4 Documentary ‘The End of the World Cult’.
It’s a belter of an opening track, driving home with the force of something big and forceful and un-clichéd as possible. You might be surprised that there is only one guitar at work here, as the entire band works hard to create a ferocious, full-bodied sound. Vocalist and lyricist Adam Murkin is great at taking a perspective and writing intelligently from it, no matter how bizarre or convoluted the perspective of that person might be. The clout with which he delivers his lines is unrelenting across the board, too, and conveys in part his mighty stage presence (both in front of and mid-crowd).
Next up is ‘The Snakeskin Wedding Ring’, which claims the crown for the longest track on the EP – marginally. And that’s one of the great things about AZWAI’s refined style. The tracks are long enough to have enough substance to hold your attention (I’m looking at you, Ampere), but aren’t so long that the onslaught becomes wearing. I know that this will be a firm crowd favourite – enough breakdowns and catchy lines for them to really get into.
Closer ‘(Poor Syntax) I Am, and You’ stands out as my favourite. I am still in awe as to how drummer Dan Taylor can manage as many stick-clacks in the space of a single second as he does to bring in this track, but this is by no means the highlight of the track. The influence of The Dillinger Escape Plan is clear from the outset, but it’s no mere consummate rip-off: the guys know how to build on their influences, rather than rehashing existing songs.
The EP may only clock in at seven minutes and thirty-one seconds, but it’s more than enough. It is an unrelenting juggernaut, devoid of unnecessary trimmings or lyrical waffle. Hear me; salvation is coming – and its name is AZWAI.”
Cheers for that Chris. If you dig Dillinger, Converge, and other bands of that ilk, you’ll dig this. You may even fall head-over-heels in love with it, which I hope you do. I can only wish the best for these guys, the talent and dedication to their art is all here in abundance. Long live Malvern Hardcore. For my previous post on my local music scene, head here for some filthy Mother Dirt. 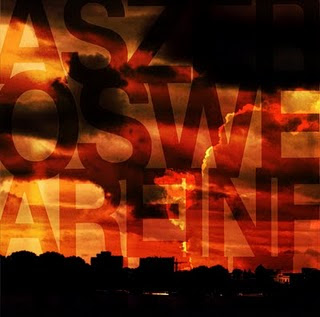 1. God, By Any Other Name
2. Snakeskin In The Shape Of A Wedding Band
3. Poor Syntax
Get Now//Buy Now//AZWAI
hardcore