Canada has long maintained its own identity within the black metal scene. Majestic landscapes and everlasting winters bore the abomination of Blasphemy in 1984, sodden with the typical sonic attributes of only the most extreme and pummelling metal. It’s been 25 years since Vinland first made a mark on the then immature black metal movement, 25 years since the storm started brewing. Now the eye has focussed upon the French-speaking enclave of Québec as its epicentre…

From the early days of Tenebrae and its metamorphosis into Frozen Shadows, to the modern terrain of Forteresse and Monarque, Québecois Black Metal is growing ever stronger, with a cohort of new young bands determined to preserve the area’s ancient culture and folklore through their music.

Gris are very much a part of this improving scene, signed to the Sepulchral Productions label run by Frozen Shadow’s Myrkhaal. Slower than most of their local counterparts and more ‘Burzumic’ in approach, Icare and Neptune speak only in cryptic allegory when asked about their main project. Gris is built on the principles of ‘beauty and ugliness, black and white, love and hate and anything that is one… We’re striving to fathom the depths and to find there a superior judgement of some kind. Take any old war photography, next to violence and desolation, you’ll always find some hope and warm-hearted feeling. Gris is our way to convey those glimpses of truth.’

It’s clear with this statement that Gris have already left a majority of the vacuous faux-satanism of regular bands choking on their dust. The acknowledgement of opposite concepts as being one is the basis of Gris’ work. This duality can be seen on many levels within Il Était une Forêt…. Beautifully enunciated French vocals tread the fine veil between breaking down in utter despair and exploding in a gut-wrenching climax of unburdened joy. Musically, the dirge-like tempos drag you through a depression quite like no other, fixated on the beauty of life and death. Atmospheric synths carry the razorsharp guitars on an airy bed of ambience and neo-classical/folk influences are prevalent through the work, culminating in the wonderful instrumental piece of La Dryade. An inspiring and original logo design also reflects the project’s dualist approach:

If you haven’t heard this yet I’d be suprised, but we are here to provide a service to those of you who have not. The record was released to wide acclaim and since shedding their former monicker of Niflheim and the stereotypical black metal trappings associated with such a title they have made an evolutionary leap forwards into a challenging, conceptual entity. Icare and Neptune already know how Gris will end; six full lengths will be released, with the last being a double album. So open the first chapter of Gris’ story, Il Était une Forêt… and await more brilliance to come. 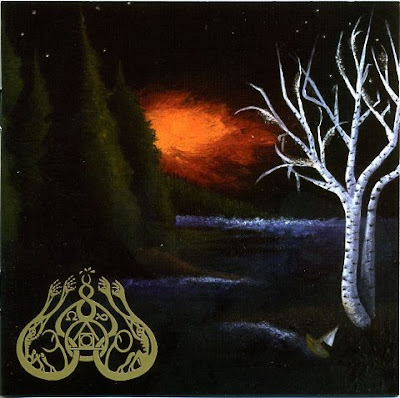