Magma are one of those ’70s progressive rock bands that are far more interesting than Pink Floyd and better in every aspect, but your Dad was perhaps never interested enough in music to branch beyond the standard British stalwarts of the day.

Founded in Paris by the now legendary classically trained drummer, Christian Vander, the band evolved around Vander’s ‘vision of humanity’s spiritual and ecological future’, a dystopian nightmare that profoundly disturbed the prodigious musician. Consequently, much of Magma’s work follows a concept revolving around the fictional planet of Kobaïa. 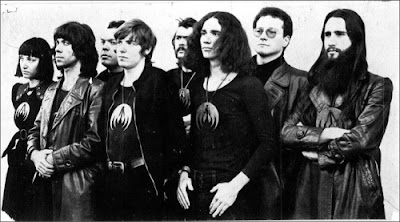 Still with me? It gets weirder.

Vander even went as far as to create an entirely constructed language for these specific works, Kobaïan, which reads and sounds much like a less angular and aggressive German. Magma’s first self-titled release was the story told through the eyes of some refugees fleeing a nightmare future Earth and settling on the new planet, hence the use of their language. In an interview with Different Drummer magazine (1995), Vander explained that ‘French just wasn’t expressive enough. Either for the story or the sound of the music,’ and developed parallel with the music as Vander found Magma’s sound.

Mekanïk Destruktïw Kommandöh follows the story of the Kobaïan prophet, Nebehr Güdahtt and the delivery of his ultimatum to the people of Earth; If they wish to save themselves from the moral degradation of Earth life, they must purge themselves and worship the supreme Kobaïan deity, Kreuhn Kohrmahn, through the learning and performing of the sacred music, Zeuhl Wortz. In fact, Magma and subsequent projects with origins in the band referred to their genre as ‘Zeuhl’ which has come to include acts like Univers Zero and more recently Guapo and Ruins.

A Kobaïan party is sent to Earth, but as one might expect they are arrested by Earth authorities for blatant cultural imperialism. This spurs Kobaïa to declare war with threats of using their WMD, the Mekanïk Destruktïw Kommandöh. However, due to the triology of albums being released backwards for some reason the ending is unclear but there is some suggestion that Nebehr Güdahtt succeeds in converting the entire planet due to the ultimate ‘truth’ of his religion.

I suppose the above is why many avoid progressive rock like the plague. It is pompous, epic, over-the-top and anything but typical. I adore it. Vander really has created a masterful mythology and drive for his music. It’s thrilling to listen to.

Of course, the music is the most important aspect here but it’s exceptionally hard to write about or even place. At the core Mekanïk Destruktïw Kommandöh is a work for a small-choir with a solo-baritone accompanied with what is essentially a jazz ensemble, with some orchestral expansions. It sounds utterly unlike anything you’ve heard before, while retaining an almost medieval Teutonic feel about the melodies but we’re merely scraping the surface here. There is a constant percussive minimalism about the sound, a precursor to the ‘martial’ music of more modern times which really emphasises the military themes of the concept. The vocals border on the delirious and insane, immediately evoking thoughts of fundamentalist religious nuts which also works to great effect. Try it out, it’s heady, thrilling stuff. 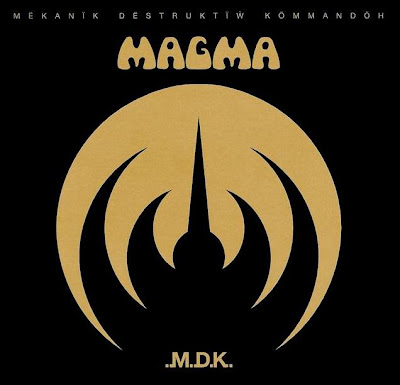