‘YOU WILL DO EVERYTHING I TELL YOU TO DO. WHEN YOU HEAR THIS SOUND YOUR MIND WILL MAKE YOU LIVE SCENES THAT YOU THINK ARE REAL. YOU WILL SLOWLY BE POSSESSED… BY MADNESS. YOU’LL THINK YOU’VE COMMITTED  TERRIBLE CRIMES. BUT I’LL BE THE ONE WHO KILLS AND REAPS THE HORROR!‘

I heard this by chance at a mate’s house. The cd-player had been spinning all night until my typical cry of ‘PUT SOME FUCKING BLACK METAL ON DUDE’ roused some reorganisation, and this little gem was slotted in. From the first bizarre sample to the last, I was hooked.
December Wolves hail from Boston, Massachusetts and play a well honed spikey black metal, with a healthy dose of thrash metal crunch. This is their only record I’ve heard, but from apparently their early material is traditional ‘norsecore’ (jokes) and their later stuff is post-black metal/industrial obscenity. I will endeavour to pick them up though because Completely Dehumanized is that good and appears between these transitional periods. Each track is killer. The riffs come thick and fast, every single one original and brilliant. Even some hardcore gang shouts are thrown in hither and thither for you crossover fans. In fact, they are the only band I’ve come across able to remind me simultaneously of Aura Noir, Grand Belial’s Key, Arghoslent and… Municipal Waste. No, really.
And with unholy namedrops like that, I doubt I need to do much more writing so it’s over to you. Download, buy, ENJOY! Oh and look out for the sick riff on Friday the 13th. You’ll know which one I mean 🙂 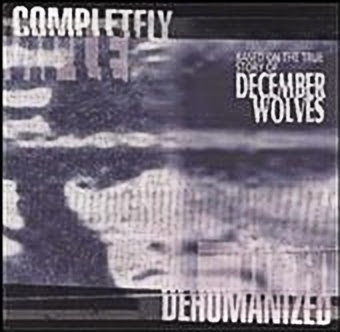 1. Conditioned By the Thoughts That I Transmit to You
2. Completely Dehumanized
3. We Are Everywhere
4. Time Flies When You Wish You Were Dead
5. Friday the 13th
6. The Gard Division
7. My Bible
8. Not With Tainted Blood
9. To Kill Without Emotion