One of the vestigial remnants on the ever-revealing face of MUSIC left tacitly by Myspace is a rather trivial configurement of categorisation.  As the site fades further into irrelevance and obscurity, the tripartate genre labelling system present on all musicians pages, so often using all three blank spaces, presumably to expand the breadth of their appeal.  No more trying to force new genres on some non-existant scene or creating infinite levels of fractal sub-genres: instead we have a trinity of culturally significant points of anchorage, like an abstract cerebral Venn diagram, at the centre of which is you hugging the band for adequately ticking three appropriate boxes.

One of the most common combinations of descriptor titles in the hyper-dimensional cube of cyber-space that I shepherd seems to be “Noise/Drone/Psychedelic”.  On the face of it it seems like this combo should be my wet dream.  I’m a big fan of the uncompromising dissonance of noise, the transcendental purity of drone, and the trippy nostalgia of psychedelia, and as this stuff seems to be so abundant (as I am claiming here) surely I couldn’t be happier.

However this is not the case.  Not purely because I’m a hateful curmudgeon, but because so much of this stuff is just…
There.  Not even worth describing.  Not bad enough to provoke derision, not inventive enough to persuade me to patiently endure as to nurture the few promising sprouts.  And so, this seemingly perfect recipe, much like love, is a big disappointment.

It is because of this shameful signal to noise ratio that I feel it necessary to pick out stuff orbiting one, more, or even ALL of these monikers Out There which is actually worth listening to, to save you trawling through it yourself and driving your hard drive to suicide.

Yellow Crystal Star is the project of all but unknown Texan Mark Billings and in the abscence of  background information to form a coherent contextual narrative, the recorded art as document of the artist yields a refreshing example of minimal yet epic dronoisedelia.

This live performance from 2006 makes me anxious for summer to come.  Come July I shall be sprawled on a sunny hillside listening to this album, diving through my eye into the cool blue abyss of the uninterrupted sky through the smoky tendrils I spew in hazy bliss.  Winter has held for long enough. 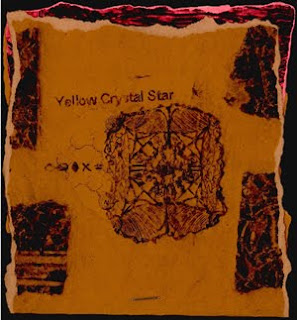