Sacramentary Abolishment usually filter under the ‘War Metal’ monicker, which conjurs up images of ridiculous skin head, leather clad, spike endowed idiots detuning guitars to the low end belly roars of some norse god while the drummer with the mental age of a 5 year old batters ceaselessly at his pots and pans drum set: insert Blasphemy, Bestial Warlust, Lust, Black Witchery, ad infinitum. I could give less of a shit about these bands, because at face value they’re incredibly hard to take seriously; the music is often even less bearable than the most ‘progressive’ of noise outfits, the ideology is borderline retarded and the band images involve the inevitable bones and gas masks and bullet belts and bald white scalps. FUCK THAT. Sacramentary Abolishment are a little harder to categorise than last.fm or myspace will tell you, they have more in common with Black Metal than the metallic death rumblings of aforementioned bands but the lyric subject matter and overall tone of the album remain WAR related. They come from the time before mass genre dissection. Furthermore, their never-to-be-released 3rd album title ended up being the new band name, and voila, Axis of Advance were born. All this name-changing business just as the genius who played drums and vocals leaves to go and form Rites of Thy Degringolade. Not to mention more namesakes like Weapon, Revenge and Gloria Diaboli. Yes. This band have quite the history. Sacramentary Abolishment then are the primordial beginnings of one of the better War Metal acts, that actually lean towards song composition over pots and pans mania. Yet they never got the attention they deserved because of the dedicedly uncharacteristic playing style that hovers somewhere between black metal and death metal/grindcore, shadowing itself instead in the voidal chasm between genres. Lyrical themes are matured and actually interesting, which comes as a nice surprise. Both albums made available to you here outshine even the brightest star from the Axis of Advance back catalogue. In a way I regret opening this post up with a bitching section about War Metal, because this band are so much better than the regurgitated insides of some hermit recluse from Canada. I fucking love this band. Incredibly fast blasting metal that remains unlapseable in its delivery from start to finish. Even the doomy seven minute track of ‘Reassessment of Preliminary Defensive Procedures’ sounds like Portal’s Dad. More riffs than The Chasm would know what to do with. They don’t even sing about the typical modern day, bullshit, chemical/gas mask/bomb related WAR all these other bands are so obsessed with either. This is when war involved mutilation and facing the enemy face to fucking face. It makes the modern war metal tomfoolery look like nursery kids, with their atom bombs and insipid motives. The only photo I could find of the guys has him holding a sabre in the middle of the forest with lots of leather (and not the Rob Darken leather in the forest look either). I want to go into battle with these dudes, then celebrate with plentiful meat and ale. 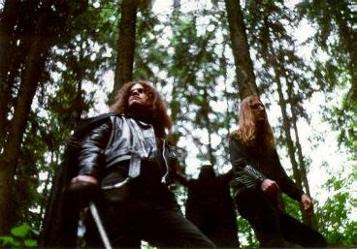