Alleged to be one of the most bootlegged demos in heavy metal history after Metallica’s No Life ’til Leather, this is the Texan quartet’s only extant contribution to the burgeoning extreme metal scene that developed during the ’80s. It was a period where metal fans would crawl over each other to trade the most evil and extreme tapes, the  demos that were ahead of the game in terms of pure punishing brutality, at odds with the radio-friendly face of the contemporary ‘glam’ metal trend. 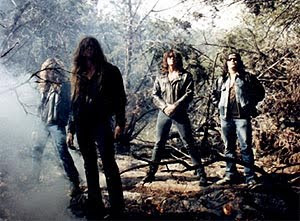 Under these conditions Necrovore thrived. You can easily see why: the first track, Mutilated Death, begins the proceedings with a sinister, droning satanic ritual. This pantomime has since become cliché but if you heard it for the first time in 1987, there’s a good chance you soiled yourself. This is exactly what the tape traders of yore were searching for.

Divus De Mortuus was recorded with a sloppy abandon the sons of Norway would have been proud of. Guitars and bass are amorphous and low end. The drums are just about audible, yet the mix as a whole is surprisingly listenable and enjoyable, only helping to emphasise the violence the creators were so obviously intent on communicating. Vocalist John DePlatchett has a brilliant proto-death metal howl that slices through the churning maelstrom created by the band, a clear influence on Attila Csihar’s De Mysteriis Dom Sathanas performance. Here and there chaotic and anti-melodic guitar solos shriek and wail, straddling the tail-end of thrash but diving head first into uncharted territories of ugliness. Enormous titans of riffs stride freely across the demo; not quite death metal, not quite black metal but an unholy mixture of both at a time where the now austere rules simply did not apply.

Euronymous masturbated to this. And as much as I love Morbid Angel, this primitive rehearsal recording makes them sound like pussies. A must if you don’t possess it already. 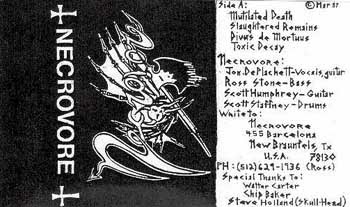