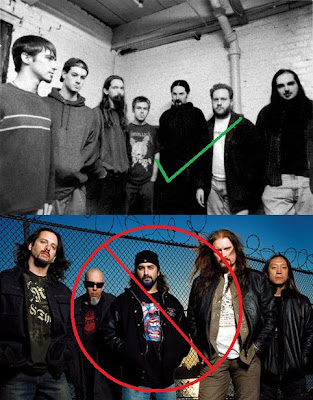 (Requested via shoutbox and last.fm)

maudlin of the Well: The best progressive metal band you’ve never heard. Sad but true, when those two words converge music fans often think you are referring to the operatic histrionics and guitar wankery of Dream Theater or Queensrÿche. But since when were technical ability and a truckload of cheese the defining factors of what makes music ‘progressive?’

That’s not to say Toby Driver and his band of brothers lacked technical ability in the slightest. Multi-instrumentalist Driver composed maudlin’s works piece by piece, often utilising sheet music and continues to do so in the band’s later incarnation, Kayo Dot. There are always so many things going on in maudlin’s music that even on the hundredth listen, a new layer and thought process can be discerned.

This is where these demos become of interest. They include a few early rehersals of songs that would appear on the Bath and Leaving Your Body Map, stripped to the bones without vocals or a decent production to hide behind. They Aren’t All Beautiful sounds particularly great with a few twists thrown in absent from the final version. Despite the basic recording process a certain clarity is afforded to the demos, allowing the listener to catch hold of nuances that are lost when professionally captured and tinkered with. A couple of tracks that didn’t see life outside of this demo are also present. Dandy Horns is a horn arrangement that appears in a different form on one of the albums and, for the completionists, Swarming features vocals from Toby and Maria Stella-Fountoulakis but even with the poor sound quality aside, this has to be the only weak song maudlin of the Well produced.

The Progwest 2002 set is thrilling and is sure to send the avid fan into a fit of envy. The crowd doesn’t even sound certain of the significance it’s witnessing but (Secret Song), A Conception Pathetic, Birth Pains of Astral Projection and Undine And Underwater Flowers are performed perfectly, note for note.

I hope I didn’t insult your musical IQ with the first sentence, but if maudlin of the Well really are the best progressive metal band you’ve never heard, you need step no further than here to be directed to their latest release, Part The Second. It’s free to download straight from the band. Their entire discography is flawless, so if you find yourself starting with these demos, oh boy, expect much better things to come.