I sought this one out solely on the merit of the artwork and a great logo design. Whoever’s behind this project has some good contacts. Unsigned bands with next to no listeners have to get this stuff right or no one will take them seriously, and this New Jersey trio have nailed it as far as sleeve designs go. I wasn’t expecting very much; you have to bear in mind that this is a demo indicative of a band in its embryonic stage, still getting their heads around a sound of their own. But I’m sure I don’t have to emphasise the thrills of discovering a generally unheard of band, especially when it’s this close to inception and almost ready to flourish. Decaying Citadel are on the brink of uncovering something special.
Forming in 2008, they initially sifted through a variety of styles all revolving around the Doom Metal archetype. Elements of Gothic Metal, Death/Doom and Funeral Doom were all tried and tested until they stumbled on the winning formula, and an original one at that. Decaying Citadel have taken to arms in the traditional vein of Sabbath and Vitus and contorted it, kicking and screaming, into a far darker and extreme hue. Think the face-melting drone and feedback of Moss in an amicable alliance with Electric Wizard’s love of all things retro-doom, sprinkle some tortured Black Metal vocals on top of that and you’re cooking with gas.
It’s the antithesis that lies between these influences that makes Ruin of the Wooded Realm an interesting listening.  On paper it sounds slightly capricious but in practise it’s an effective melding. Bluesy bass lines bubble along the bottom of subterranean drones, while the vocals snarl with indifference at the trademark dirge pace. As with many demos, the main downfall of this release is the recording quality. If you’re expecting this to sound incredible you will be disappointed. On the other hand, if you can see through the shoddy production and imagine how this would sound in the hands of, say, Randall Dunn it makes a lot more sense. Granted, that’ll probably never happen but I wish these guys the best of luck. Plus, if you turn it up (maximum volume, maximum results and all that jazz) the feedback makes your facial hair vibrate.
Definitely a plus. 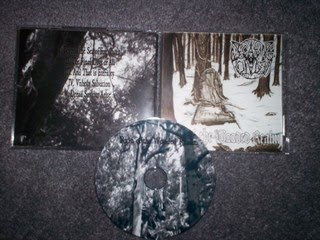