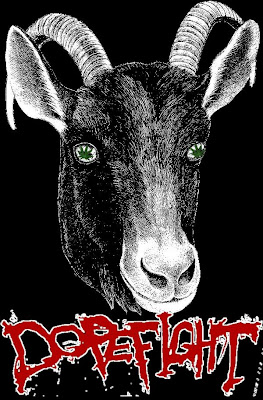 The Brighton music scene is ailing. The bit with all the big riffs anyway. Fortunately, Dopefight raise a defiant fist out of the mediocre swamp that surrounds them. Genuinely passionate about the music they create, they’ve had it hard. Failed bands, terrible gigs and generally pumping effort into things that never saw the light of day. But on the upside, they’ve picked up a few fans from all over the world on the way here. A chance discovery that happened to be based where I’m now living, of course I had to have a look.

Dopefight play a straight-up sludge/doom metal. It’s primitive and simplistic but this is where their strength lies, with each riff delivering a massive slab of pure goat and weed worship. I caught them live last night and they’re a force to be reckoned with already. They nailed their angle after one demo and a split with Dead Existence; a potent mix of Bongzilla, Grief and Kylesa sludge with a hardcore edge. With a full-length to be recorded next month Dopefight are set realise more potential. Ant (drummer) came round and answered a few questions.

Hi Dopefight. Thanks for taking the time to answer some questions. Who are you guys and what do you do?

It’s Ant on drums, Paul on bass, Owen on guitar and vocals. We get high and write music. That’s about it really. 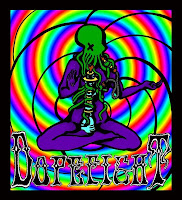 Could be better.  Thing is about Brighton is that it follows the trends, whatever’s fashionable will be the big thing. Being in a sludge band is difficult because there isn’t much of a scene but the few bands that are involved in it are nice guys.  Brighton’s a small place, there’s generally a lot of gossip.  There’s only a one degree of separation, everyone knows everyone. It will often work against you. “Indie” definitely dominates right now, but what’s next I don’t know.  The sludge scene in Brighton would also be a lot better if people could work together, but a majority of the bands in Brighton don’t give a shit about the others. No one’s interested in making a community.

How did Dopefight come to be? I recall you mentioned that Dopefight was not any of the member’s main projects during the band’s initial phase. Care to shed some light on what came before? 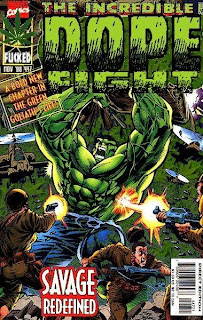 We were all doing this St. Franc Cartel band, a rap/punk/grindcore hybrid, nothing came of it after fucking years though. Me and Owen had always wanted to start this sludge band called ‘Dopefight’ but we didn’t know anyone who was into sludge and played bass. Then Paul wanted to give it a go even though he’d never played before.

You’ve got a cool name. It makes me think of fighting while stoned… which is ridiculous.

A lot of people have said that. We wanted a name in the vein of Weedeater or Bongzilla so we thought ‘smoke punch’ but then Dopefight was much better.

Your myspace page is plastered with a load of artwork. Who is responsible for these weed worshipping designs?

Owen does it all. Owen loves anything to do with goats or weed or satan or comic books.  He’s a proper comic lover.  He gets high and just makes it. So many people have written to us saying ‘I just saw your site and now I need a smoke.’

What are your main influences as Dopefight? 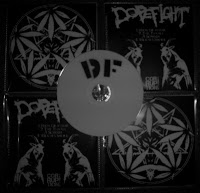 Hail Hornet, Iron Monkey, Church Of Misery, Bongzilla and Weedeater. Those are the main ones.

To date you’ve released a self-titled demo and a split with London’s Dead Existence. What sort of reception have they seen from the sludge-devouring public?

I’m quite surprised at the reaction really. A lot of nice words from quite a few people and a lot of fucking head-nodding at shows (not in Brighton of course).  We’ve sent cds to America, Indonesia, France, Germany, quite a few places. People go out their way to get a cd so it’s a big compliment.  We do this shit for us and if people enjoy it it’s a total bonus. It’s really nice that people like it.

A full-length is in the works. Has a title been settled on, and what can we expect from you guys this time round?

Have you toured around? What’s the biggest show you’ve played? 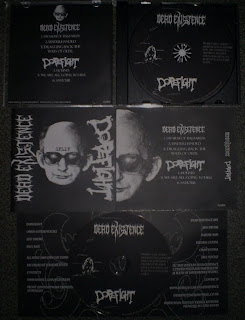 We’ve only been around a year so have only played in the south but once the album’s done we can spend a lot more time on setting up shows and tours. We played Loud Howls Fest  in London at the Gaff last month. Two solid days of doom and sludge. That was really good fun and a lot of people were there. We’ve also played with Thou, Burial Hex (first show ever), Army of Flying Robots, Dead Existence, Trippy Wicked, Suns of Thunder and Charger.

Any final words of wisdom?!

Here’s a download for the monstrous Hijos De Fumar, opening track from the Dopefight demo. All recorded tracks can be heard at their myspace page and releases can be bought from here. Any money spent goes straight back into the band to fund the album. Support.