Inquisition have confirmed they are working on/recordig a new studio effort, lightheartedly titled ‘Ominous Doctrines of the Perpetual Mystical Macrocosm’. We are all familiar with Inquisition’s work and that undeniable sense of orthodoxy and ascension that finds its way into the music. Expect more magical illumination in the form of pure satanic black metal later on this year. The new album, as well as a re-issue of Inquisition’s debut album ‘Into The Infernal Regions of the Ancient Cult‘ in deluxe format (CD and 2xLP), will both be released through Hells Headbangers in the US and No Colors in the EU. 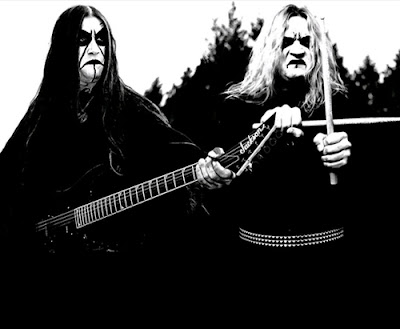 “Inquisition are scheduled to be in the studio on March 11, 2010 in Los Angeles, Ca. to begin the recording of their 5th full-length studio album. The title has been released, and will be “Ominous Doctrines of The Perpetual Mystical Macrocosm”. More information will be posted as soon as it becomes available.
Also, don’t forget that Hells Headbangers Records will be releasing a re-issue of Inquisition’s debut full-length album “Into the Infernal Regions of the Ancient Cult” from 1998. This will be available as a deluxe digipak CD, as well as a double LP; both with better sound quality than the original. The re-issue will also include new album art done by the mastermind who created art for Inquisition in the past, Antichrist Kramer.
Further information regarding the re-issue can be found here.