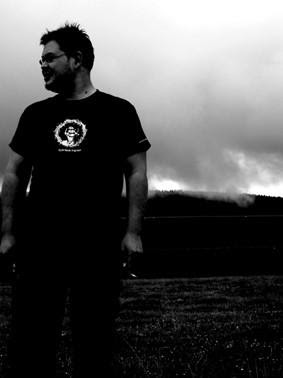 For frequent visitors of Lurker, I’m sure Gnaw Their Tongues needs no introduction. A one-man vehicle of undistilled terror and confusion, the musical territory of Gnaw Their Tongues cannot be pinned down easily. Sprawling across the raw aggression and malice of black metal, it traverses the harsher aspects of noise and drone while smashing through the perverse fringes of industrial and dark ambient. While Gnaw Their Tongues is perhaps the flagship of Mories’ works, he is also the sole creative force behind the bestial, avant-garde onslaught of De Magia Veterum. Considerably more guitar-based than Morie’s other projects, De Magia Veterum is a tour de force in black metal that is not limited by stagnant traditionalism and elitism, a mindset which is, thankfully, on the decline. The throbbing static drones that pour from Aderlating are also the work of our man here, a project that can be considered a more relaxing (?) alternative to the visceral grind of Gnaw Their Tongues. Alex and I caught up with Mories and asked a few questions about himself, his work and what has influenced him to bear such an abhorrent, twisted and generally fucked up trio of children.

What is the musical underground like in the Netherlands?  Are there many Dutch artists you hold in high regard?

No, not really. I actually have a strong dislike for most artists here in the Netherlands. I don’t know of any other bands with a sound like mine either. I think the problem with the Netherlands (at least in my experience) is that bands all want to sound like some one else. Indeed Urfaust have completely their own sound and I can appreciate that, but it’s not really my kind of music. Also, I’m so utterly in my own little world, I’m blissfully unaware of any ‘scenes’ or what not. Most of my friends aren’t even into heavy music.

Your latest release through Hell Lies In Others; ‘Tsutomu Mizayaki’ is influenced by the serial killer of the same name. His crimes were influenced by an extensive interest in Horror and Slasher flicks. Alot of your own tracks use samples to set the mood, not all of which are instantly recognisable. Tell us about your relationship with film and media in general.

I used to include lots of samples in my music. I don’t do that anymore, but samples are indeed a great way to set a mood. I’m also a big fan of film music, because it too sets the mood right away. I used to be a film freak (thanks to a BBC series of ‘freaky’ movies really late on sunday evenings, some time in the nineties) but films have hardly made an impact on me lately.

You work on your various projects entirely alone.  Have you had much experience in a band environment? Would Gnaw Their Tongues ever consider operating in a live setting?

Never say never but I can’t see it happening right now. I only play live with Aderlating at this point.

I started out in high school with a doom/death band, Atrocious. We could not really play our instruments at the time: great fun, but very crappy music. Then I formed Cauteror with some other guys, again doom/death, also very crappy. I think we did two or three demos. Later it became Soulwound which also did two demos. The last one was pretty good: some sort of funeral doom (before the term was invented), a bit melodic with both clean vocals and growls. With one of the Soulwound guys we also did a BM project The Nefarious Cult, we did one demo. Soulwound could have gone places, but we were all too busy with school or work . And we smoked way too much at that time, nothing got done!

Do you do all your own artwork? All Gnaw Their Tongues and Aderlating releases I personally own have great aesthetic value, is this something important to you?

Yes visuals are an important aspect of both projects and yes I do ALL my own visuals, from sleeves, to ads and promo photos.

Each of your projects emits a very particular atmosphere and feeling. In regard to Gnaw Their Tongues, De Magia Veterum and Aderlating, what aspect of your personality are you trying to exorcise and express?

That part of me wants to kill the world but is too depressed to do something besides making mind-numbing music. De Magia Veterem was there first, that’s basically a guitar-based black metal beast. Aderlating was created for playing live and is much more drone and noise based than Gnaw Their Tongues.

There is clearly a vast pool of different musical influences running into your work and to categorize it is a challenge.  What kinds of music have ushered you down this creative path?

I went from ‘rock’ as a kid to ‘metal’ to ‘death metal’ to ‘black metal’ to everything. I really listen to all kinds of music nowadays. At the moment I’m mostly listening to the new Broken Social Scene, Bloody Panda’s Summon, Animal Collective, Morton Feldman’s Coptic Light and some soundtrack compilation from some blog.

What is your stance with black metal? The phrase is often thrown around where ever Gnaw Their Tongues is mentioned, but I think this hardly covers the scope of your music. I recently got hold of your early release as Astral. The black metal imagery is in place yet the music is still strangely beyond. Can you elaborate on the project?

I actually liked black metal until the mid nineties when I really grew tired of the whole thing. The reason my music is ‘strangely beyond’ is probably because I do everything on my own. No influences outside my own head. I am also not really into imitation. I’ll maybe use an idea/sound from a band I like and twist it into my own thing but the moment I come up with music that even remotely resembles some other band/composer, I’ll throw it away. Astral was mainly inspired by Necromantia. I also used mostly bass guitar and was very fascinated by ‘ritual’ (and free form improv) music at that time. The second demo is a little more ‘normal’ black metal.

I used to read a lot, but the last three years I’ve not read a single hard copy of a book. I try to read online (Gutenberg). Most ‘classics’ from the last two centuries are online. I think I read Heart of Darkness and some stuff by Mark Twain last.

In Gnaw Their Tongues I can at times sense that you might be familar with Akira Yamaoka; the man behind the Silent Hill soundtracks. Have you ever come across the Silent Hill video games? They echo a very similar feel to your music.

People always mention Silent Hill, but I’ve actually not heard that stuff. I’m not much of a gamer but I should check it out, it sounds interesting.