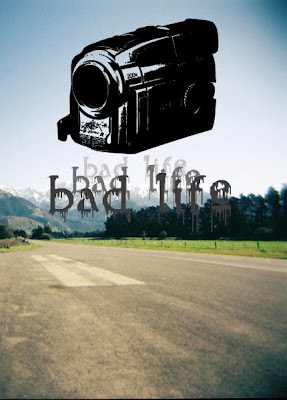 A very nice surprise for me, the Bad Life side of this split manages to take the listener on a really odd but beautiful trip. For the first three minutes it seems a pleasant enough post-punk/shoegaze blend. The vocals have that nasal Ian Curtis feel to them that so many bands worship, but fortunately there’s an eerie quirk to them that aligns with those of Circles of Ouroborus. The drumming is mechanical yet intricate, driving the music forward with a plodding determination while thick and fuzzy bass conjures comparisons to an up-beat Have A Nice Life.

There’s an enjoyable pop immediacy that is absent from a lot of the music we feature here, but the shimmering facade is soon shattered by a crushing doom riff at the end of second track, Eat Your Dreams. From this point on it’s clear Bad Life aren’t just a walk in the park post-punk revival. The doom metal element carries across their half of the split with Scattered Exceptions sounding more Black Sabbath than Joy Division.

The owls sampled on this track are not what they seem however, as Bad Life warps once again on Dirty Jeans to a goth pop version of Angelo Badalamenti’s Twin Peaks masterpieces. Out of the claustrophobic doom ‘n’ roll of the closer materialises Howard Beale’s “I want you to get mad” speech from the 1976 film, Network. It’s never sounded so relevant these days and adds to the overall paranoid mania that Badlife evoke.

I’m not going to discuss the Enslaved By Owls half because it was a bit gimicky. But that’s what you have to expect from a band with song titles like Midnight Satan Overdose and Super Mutant Phantom Teen Gang. Check them out by all means, but get this split for Bad Life.