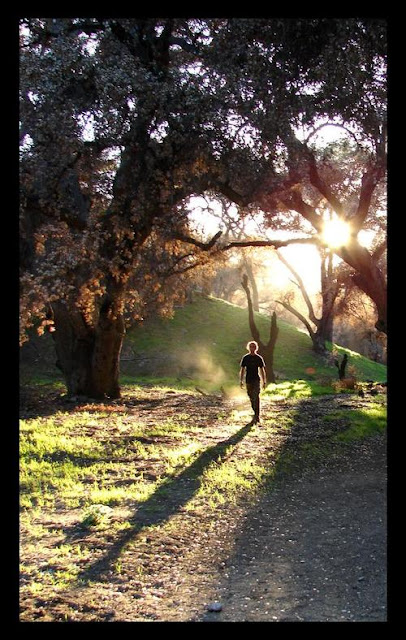 Oskoreien. The Wilde Jagt, Woden’s Hunt or Åsgårdsreia, this band actually inspired me to do a post on Peter Nicolai Arbo at the end of last week. I can’t really turn away when black metal bands make nods to mythology in any form. Oskoreien consists of sole member, Jay Valena from California and despite his young age, Valena  gives some established bands a run for their money. Obviously indebted to the Cascadian sound that’s recently sprung forth in the far west, a clear comparison can be made with Wolves In The Throne Room.

The guitar sound and style is effectively a direct emulation of Washington’s finest, but Oskoreien really manage to hold their own. For such a comparatively young disciple of black metal, Valena composes with confidence and aptitude. There’s a strong folk element to the music that WITTR only vaguely touch upon, giving Oskoreien a viking/pagan upper hand that I’ve really enjoyed. The first track, Transcendence opens with mournfully e-bowed guitars that form a back drop for an acoustic introduction that betrays Valena’s knowledge of traditional European folk.

Instead of ditching this frill when the distorion pedal is stomped, Oskoreien continues to ride atop the folk influence for the duration of the demo like a longship rides the waves. It becomes all the more compelling when you realise that WITTR could have sounded like this. To be honest, I’m not even a huge fan of them; Oskoreien’s take on the Cascadian sound is far more melodic and majestic than many of the scene’s big hitters. Guitar parts are colourfully drenched in gorgeous harmonies and not once do the tracks seem to drag or stale. The epic riffs and leads only set the scene up for what will inevitably become a dramatic climax.

Being a one man project, Oskoreien is another band to feature on LURKER that is forced to employ a drum machine. Unlike with last week’s Mἄrsh entry, percussion is really well done. The only thing that gives it away as artificial is its inhuman ability to keep time, but it’s barely noticeable. It just goes to show that some decent equipment and skill goes a long way.

If you’re ok with your black metal being gloriously melodic, then I can tip Oskoreien as one to watch. The comparisons to WITTR are a damned shame, however unavoidable, but Valena has demonstrated with his 2009 demo that he can and will stand his ground. Oskoreien have also contributed a track to the recent Der Wanderer über dem Nebelmeer compilation on Prophecy productions. I haven’t heard it yet, but can only hope that Valena comes out of his shell a little with each new release.