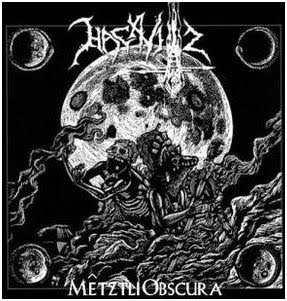 Mexican metallers Hacavitz have always lurked in the no-man’s-land between Death and Black Metal, sounding more like a natural mid-point between the styles than a carefully thought-out blend of the two. With third album Metztli Obscura (Moribund 2010), the duo don’t stray too far from familiar turf, but take a few steps closer towards Black Metal. The result – I’ll say it now- is pretty fucking brilliant.

Several big changes set this album apart from their previous work, particularly from 2007’s Katun. The most obvious difference is the production: Katun‘s murky and drum-heavy sound (which earned it quite a slating) has been replaced with a sharper and more balanced production job that does far more justice to the band’s often technical riffing. Gone too are the atmospheric samples and traditional Mexican instruments that peppered the last two albums. The songs are also a hell of a lot more concise: not a moment is wasted on filler, and several tracks are well under four minutes. Hacavitz have trimmed off every conceivable bit of fat and then shat on it.

What we’re left with is a 37-minute barrage that doesn’t let up once. Each song twists its way through a variety of tempos, dotted with the occasional well-placed solo and a few headlong 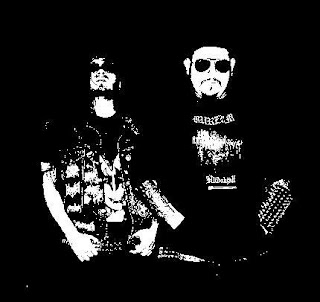 dives into blackened thrash (‘Sulphur Winds’). The band’s real trademark, however, is the dissonant jangling strokes of the top strings, bringing to mind the stylings of Deathspell Omega and Ulcerate. These had started to creep in on the last record but were often hidden by the production; here they stand out like flashes in the dark. Guitar mastermind Antimo also throws in the odd passage of dissonant picking that adds some real atmosphere and offers a change from the tremolo riffs.

Lyrically, the band switch between English, Spanish and what I guess must be the Aztec language Nauhatl. I can’t speak for other two, but the English lyrics are pretty standard Black Metal fare. Not everyone’s cup of tea, maybe, but having songs in Aztec makes up for it in my book. Plus, there’s enough of character and variety in the delivery to pull off even the shakiest of lines.

If there’s one weakness to this album compared with its predecessors – and I’m really scraping the barrel here – it’s that Hacavitz only ever let the tempo drop so far. Songs like ‘Tenieblas – Tenochtitlan’ on Katun showed that the band do a really smart job of a creeping, expansive dirge; but here proceedings are mostly kept short and sharp. As for the material that ended up on this record, though, I can hardly fault it. I’ve just given Metztli Obscura its seventeenth spin and I’m still getting more out of it.

Go on, do yourself a favour.