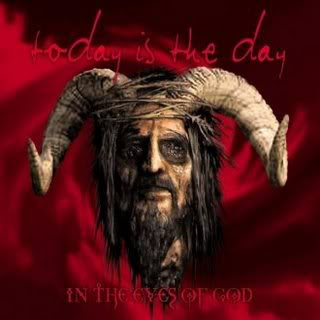 While downloading still reigns supreme as the most convenient way to digest and experience a vast amount of music for the majority, this true gem and classic of the manic Steve Austin’s long-standing noise rock outfit is sure to have been ripped and downloaded countless times. This hasn’t stopped Relapse from reissuing 1999’s In The Eyes Of God however, hands down Today Is The Day’s most violent, caustic and sickened album. It’s also the work most rooted in metal and hardcore sounds from the bands aged discography, while continuing to honour the progressive bent that started on the 1993 debut, Supernova.
In The Eyes Of God has also had its place in extreme music history etched in stone thanks to the assistance lent by Mastodon’s Bill Kelliher and Brann Dailor, long before their other band went stratospheric. Their performances on this album are as thrilling as you would come to expect from such accomplished musicians. It’s up for pre-order from Relapse as of today repackaged and remastered, so if you’re not familiar with Today Is The Day or simply never bothered to give it your time, In The Eyes Of God is an ideal place to start your journey into the depraved depths of Steve Austin’s catharsis.
grindcorehardcorenoise rock