Watain’s single Reaping Death has been awarded gold status in Sweden, after selling over 10,000 copies. In a genre whose fans usually praise albums rather than hit songs, it seems odd that sales of a single should outstrip those of the full-length. Is this a sign that Watain have broken into the more song-centered market of popular music?

The most interesting (and amusing) thing to come out of the single’s success is frontman Daniel Eriksson’s reaction. I’ll let it speak for itself:

“‘Reaping Death’ is a song written as a tribute to the first murderer and Satanist, Cain. Through the murder of his brother Abel, he was the first to break the shackles of creation and went against the will of God. Therefore, he was pushed away and found his way to his true father, the serpent in the Garden of Eden, also known as Satan. To openly praise Cain, his origin, his works and his offspring is something that never would have been possible, say 300 years ago. 300 years ago they tied people such as us up and burned them alive. Now we are awarded gold discs and praise in the media. This is an encouraging proof that this road is leading to hell. “Through black metal we now have a forum, in which we, without being persecuted and tortured, can celebrate the ancient ruin forces, revolutions and the gods of total liberation, and thus give them additional force. This gold disc is proof that the genre as such is one to be reckoned with, and with fire, fanaticism and passion as the driving force, we intend to take it even further, deep down in still unexplored abysses…” (from Earsplit PR; my emphasis.)

Openly embracing commercial success is a striking response from a Black Metal band, and something unimaginable in the genre’s first explosion of mainstream attention in the early-to-mid ’90s. To say that BM is new and dangerous (‘we now have a forum’, ‘one to be reckoned with‘, etc.) is pretty disingenuous, but the dude’s commitment to his job as an evangelist for the big guy downstairs is perversely impressive. 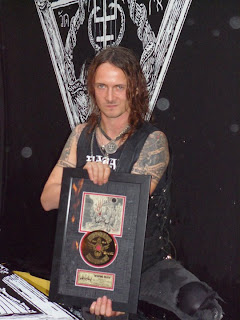 Edit: on the topic of metal in the mainstream, I’ve had some fun looking up various BM bands’ successes in the Norwegian charts. Watain aren’t the only ones to sell well in their own country: Darkthrone’s Too Old, Too Cold single reached # 11, and Mayhem’s Ordo ad Chao charted at #12. Unfortunately, the site doesn’t give actual sales -figures.