Metal and Stonehenge go back a long way. The great stone circle has captured the imagination of metal bands since the genre’s beginnings, and a fascination for lost civilizations carries on today, blissfully untroubled by parody. However, some recent trends in archaeology hint that the affinity between metal and the prehistoric could go deeper than we think.

According to NewScientist, a new school of archaeologists believes that some of the earliest human constructions, including Stonehenge, were specifically designed to create powerful acoustic effects. Experiments carried out at Stonehenge and at the full-scale reconstruction (‘clonehenge‘) in Washington have shown that the sites can produce some very strange and very impressive noises.

The most interesting experiment involves a drum machine placed at the edge of the outer circle of stones (video below: watch with headphones). As long as you stand right by the speaker, you can hear that it’s playing a bass drum loop at about 120bpm. But as soon as you move away, the reverberations from the other stones begin to drown out the drum until all you can hear is a rich drone.

Stonehenge, in other words, would be a terrible place to address an assembly or preach to a congregation: a voice can be heard loudly, but like the drum, the percussive consonant-sounds would blend into an indistinguishable soup of echoes. On the other hand, a large number of these monuments resonate most effectively at frequencies within the adult male vocal range. This has led some to suggest that the sites served to enhance the sound of human chanting, either for ritual or musical purpose, or perhaps both. Melodies or words might be lost to the reverberations, but the resulting drone would have given even Sunn O))) a run for their money.* 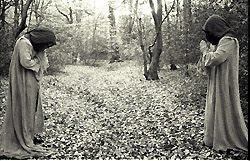 Of course, ‘acoustic archaeology’ involves a good deal of speculation. With no written documents surviving from the age of Stonehenge, there’s no firm evidence that these effects were deliberate. But as archaeologist Paul Deveraux points out, in the 3rd millennium BC the average person’s hearing would be far better tuned to fine detail than someone’s today: you’d rely on it much more for hunting, awareness of danger, and so on. So why couldn’t a musical tradition develop that concentrated more on the finer aspects of sound, such as texture and harmonics, than on more blatant features like melody?

These finer aspects lie at the heart of several of metal’s subgenres. Drone doom is the most obvious example, but not the only one. The very same features of texture, harmonics and tactful reverberation come together to make up the ‘atmosphere’ that is so important to Black Metal. Every strike of the pick in a tremolo riff brings with it a new harmonic; the faster and more repetitive the blastbeat, the more it becomes a rich wash of texture. Get these things right and the most compositionally minimal slab of BM becomes a masterpiece of atmosphere.

Metal’s reliance on the finer details of sound could provide a direct link to the lost music of the distant past. Perhaps, then, its fascination with forgotten civilizations is more natural than any of us ever realised. 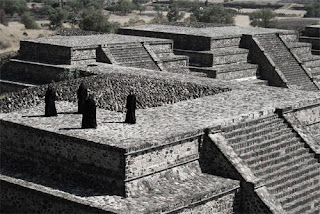 * See also this article, which claims that Stonehenge has the unique effect of cutting the treble and deepening the tone.