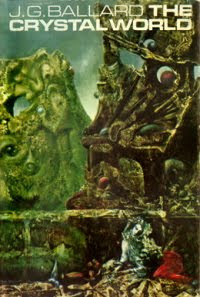 November 27th will see the return of Chicago’s Locrian with the third album, The Crystal World. To be released through Utech Records, this new work sees Locrian treading an interesting conceptual path as an aural exploration of the themes set down in J.G. Ballard’s 1966 science fiction novel of the same name. The story follows a doctor’s journey deep into the African jungle to a leprosy treatment facility. On his travels he discovers that a bizarre, apocalyptic occurrence has crystallised a portion of the forest, engulfing everything it encroaches upon. I haven’t read it, but if there was ever a reason to pick up a copy then surely Locrian’s new album is it. Joining the core membership of Terence Hannum and André Foisy is Steven Hess of On, Pan American and Ural Umbo fame taking on percussion and electronics duty. From the horse’s mouth: 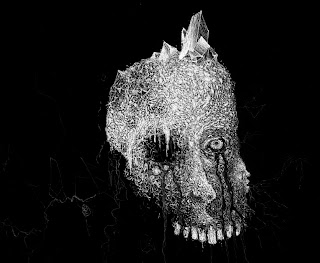 “Hess’ contribution pushes Locrian deeper into the abyss of despair rendering a sound that is darker, bleaker, and engulfing than any of the group’s previous releases. Locrian continue the conceptual trajectory of blackened drone that the group initially embarked on during their first studio album ‘Drenched Lands’ (2009). Masters of layering, ‘The Crystal World’ finds the group manipulating tones and textures that transport the listener to an apocalyptic wasteland. At times, the layers are serene and somber, at other times they are chaotic.

Of Locrian’s three studio albums, ‘The Crystal World’ is the essential release, finding the band creating a sound all of their own. A sound that evades simplistic analogies to black metal, power-electronics, noise, or other categories. This is the album that will stun fans of the bands previous works with how far the group has come from their early releases. Vinyl edition out on Utech Records in 2011.”

Artwork is being handled by the lord of visual hell, Justin Bartlett, and Locrian are to debut the new material at the Hopscotch Music Festival in Raleigh, North Carolina on Thursday, September 9th.