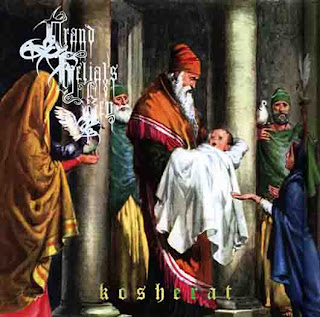 This is the first in a series of posts on things I’ve found buried in the music, lyrics and artwork of metal records. Maybe people have picked up on this stuff before – if you have, tell us about it. The idea is to provoke discussion and maybe discover more of these hidden details.

Listening to Kosherat the other day, my ear picked out a familiar tune, which on previous listens had gone right over my head. Woven into a riff in ‘The Bearded Hustlers’ is the opening phrase of the German national anthem, Das Deutschlandlied. Have a listen and see for yourself:

Why, you might ask, would an American band want to bring in a theme from the German national anthem? The answer’s in the song’s history. Nowadays only the third verse of the Deutschlandlied is sung, but during the Nazi era it opened with the infamous words, Deutschland, Deutschland über alles (“Germany, Germany above all”). Thanks, perhaps, to its use in war films, people outside Germany are more familiar with the earlier version of the anthem than with its modern replacement. The association with the Nazi era, then, is kind of understandable. You only have to type the opening lines into Youtube or listen to Wolfnacht to see that the NSBM kids are all over it like a rash.

Grand Belial’s Key have always been careful not to endorse Nazism too explicitly in the public eye, or in their lyrics. And they’ve not done too bad a job: concentrating (as they usually do) on lyrics alone, the Metal Archives simply list them as ‘Black Metal’ rather than ‘NS Black Metal‘. Despite this relative coyness, though, it seems that GBK still like to throw in the 8dd b8ne for the true bel14ver.

Has anyone noticed anything similar elsewhere in their music? Or in metal in general?