Urarctica Begins, debut EP from the ambitious convoy of Ensorcelor, is a 36 minute voyage through some of the most expansive, introspective sludge ever to grace Canadian shores. Awash in an array of influence and distorted feedback, grating tensions and euphoric releases, rasped vocals that sing of the end over crushing guitar melodies. Haunting, mesmerising and full of the conviction and tension a hardcore upbringing imbues – this Quebecois five piece have forged a monument of timeless winter, expansive soundscapes and lovecraftian storytelling.

The brutal fucking winter. It has a serious effect on who you are – I believe that. 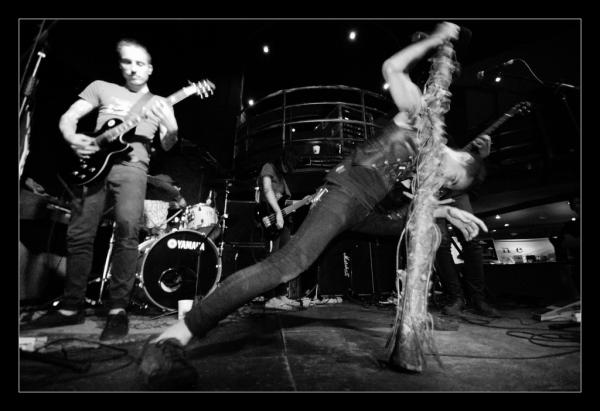 The material on Urarctica Begins deals primarily with the remote extremity of the arctic, untouched and isolated from man’s sphere of influence for time immemorial. Fitting, considering the winterlike taint to the clear guitar passages, the haunting corridoors of feedback that cave and coalesce between episodes of instrumentation lend a blizzard like cold to proceedings. Tracing an understanding of the chosen theme, represented clearly enough through the music if not by the lyrics (available here), was further elaborated on by Jonah, vocalist for the five piece:

‘Urarctica Begins is sort of a superficial reference to a William Gibson novel. There is a chapter called ‘Antarctica Starts Here’ and that phrase was bouncing around my head for a while until it started picking up a lot of psychic and conceptual detritus. I have always been really interested in the arctic and Antarctic. There is something profoundly fascinating about the extremity, the remoteness and isolation, the distension of our regular time scale – the idea that there is snow out there which has been piling up for millenni. There is a mystery and a drama to it that has been exploited by the artistic imagination in so many ways, Lovecraft and Shelley being two outstanding examples, both of whose work has had a major influence on me lyrically and personally. Getting back to the point, Urarctica sort of plays on the philosophical idea of ur- which is the pure formal expression of a thing. For example the ur-cat would be the pure idea of a form of a cat, of which all living, real cats in the world are only specific material approximations. Urarctica is a sort of original ice, from which all ice, all coldness is derived. Furthermore, “Ur” is a name which has been applied to what is postulated to be one of the first supercontinents on the face of the earth, over 3 billion years ago – from which our current continents are formed. In this way the Urarctic is this icy realm which precedes our arctic and Antarctic. For Ensorcelor, Urarctica is not so much a place as it is a force – the return of an original coldness that obliterates. It is an indomitable coldness because it comes from within. It is not a physical cold, it is a metaphysical cold. You know, like the summertime blues.’

As coagulated as the philosophical soup behind Urarctica Begins is, the EP lives up to the idea. We have a vocalist who takes time over his lyrical murmurings and a band that produce flowing, unconventional sludge to the coldest peaks of expectation. Closing track, ‘This Even Doom’, was made available on the Sunyata Recordings Sampler (available here), and tracks the band at their most expansive and inventive. A clean guitar melody paves way for a torrential passage of sound that builds and expands on the initial idea until the crescendo of the wave. Jonah explains: ‘I like the way slow, drawn out music tends to be an immersive experience – you can’t really dance or thrash to it, you just have to sort of stand there and soak. I think that this music it lends itself really well to creating expansive soundscapes, and also to playing with different narratives, lyrically. You really get a chance, in a 10 minute song, to develop themes over time that in a 3-5 minute song would be so compressed that they would be pointless to try to explore’.

The striking direction and momentum behind the music is one of the debut EP’s strengths. Never dull, unclear or disordered – the music treads a variety of ground. From the piano and airy vocal duet midway through ‘This Even Doom’ to the thick turbulent sludge in play throughout the EP’s shortest track; ‘Sleep Forever In The Brine’. The band’s obsession with creating music epic in scope while never detracting from the tracks impact is clear: ‘I think we are more compelled by ideas and atmospheres – we are always saying “Oh, this needs to be more crushing. Or that has to be more plodding, or epic, or bleak or whatever.” It is often couched in language of weight and space and topography in a way. It can easily sound cliché, but I think we are very influenced by the evocative landscapes of fantasy and sci fi novels, be it Frankenstein, or Ballard, or Tolkien, or His Dark Materials.’ Soak it up I say. Urarctica Begins is epic. It is interesting. It teeters on the edge of pretentiousness without ever falling into the brink of vain, uninformed musical misadventure.

Urarctica Begins has already garnered a lot of attention from a number of labels. Available in America on cassette from Gay Scientist Recordings, in Canada on cassette and CDR format from Media Tree (The guitarist’s own label, soon to put out the undeniably strong effort by his other band – Æsahættr) and soon to be made available in the UK by Sunyata Recordings – there is little reason for letting this slip past you. If you do happen to live in the arctic, and somehow have made it onto the world wide web, the release is also available as a digital download from Alien8 for a very reasonable price.

If you have already imbibed the whole of the release and are eager to hear more, then we have some good news. Ensorcelor ‘are actually in the process of wrapping up the mixing of a new record, which is somewhat embarrassingly destined to be a double lp – because of the 4 songs, only one of them is under 20 minutes long. It takes some of the ideas we were playing with on the demo and develops them more fully. Also develops them more slowly. It’s pretty ridiculous.’ Long may the sludge prosper!