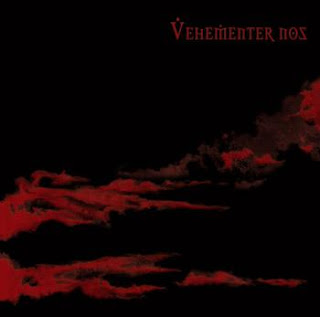 This is how to approach progressive black metal. Organic instrumentation, intelligently and reverently composed sections of metal juxtaposed and at times intersected by key moments of classical euphoria. Think of the blind wanderlust of the majority of black metal bands, remove any insignificant sections or ‘filler’, include the ‘french black metal’ tag and you are only just beginning to comprehend the release presented before you.

Released in 2007 on Osmose Productions (still waiting on the day that this sees a vinyl release), this release tracks six years of composition by Vehementer Nos. Unsurprisingly, this is their only release to date then.

Very hard to pinpoint a key sound on this release. Key staples of any black metal band – guitar, drum, bass and vocals are the motivating force. Violins and extra instrumentation are kept to highlight key pivotal aspects of the music, never venturing into the backdrop of over burdening synth ambience or badly integrated harmony. The violins practically flow with the music when summoned, they highlight and further the drive, refrain or release – whenever they are needed. This is what makes this project from France so incredible. They know how to write impassioned, vitriolic black metal at the best of times – usurping the customary black metal paradigm by subtly including different instruments and paying attention to the structure of their tracks.

Overall, comparions to A Forest Of Stars and Altar Of Plagues are appropriate but not full descriptions of the music. Predominantly distorted tremolo guitar work under hefty, double bass gauntlet drums – the mass of the melody and direction of the album are undertaken almost wholly by the guitar which do a great job at guiding the songs to places outside your usual sphere of expectation. As a simple black metal album, the changes in direction, speed and arrangement are enough to warrant a post. Take ‘Absurde’. The track sways to and fro in a sea of dissonant chord arrangements, almost tortured vocals and equally undecisive tempos. The melodies swim through distortion to acoustic sections, before the inclusion of a flute brings the whole track spiralling together. At 7.15 the previously dissonant and largely wading track takes direction at a crescendo point, unleashed and given depth by the inclusion of the flute. Seuls contains an equally awe-inspiring number of dynamics, changes and refrains that leave you nothing short of inspired.

Each track differs largely from the previous and whilst the melody of the strings pays blatant homage to a classical upbringing, the openly blasting sections of metal that counterpoint the more sublime passages are equally as brilliant and characterised. Album closer, Dans Le Flôt, is perhaps the highlight of the entire album. A melancholy piano opens proceedings, is greeted by a lone violin before swelling to include the entire mass of instrumentation. The riff is truly inspired, drums ache and groan through a pattern I rarely observe in metal and the vocals retain the stereotypical French accent that suits the despair and transcendent value of the track completely. Strings and guitar weep and direct the wall of melody before the inevitable collapse as the album retires.

Perfect progressive avant-garde black metal that goes so far beyond anything I can think to put into words. Order here, and give it a listen/drop them a few emails over at their Myspace to convince them to make more music like this.