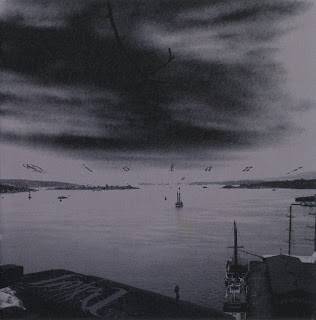 For the last six or seven years, Germany’s Horn have been churning out a steady supply of great records, the latest of which is Distanz (2010, Black Blood Records). In a year that has already produced a glut of decent Black Metal, an album like this will probably go largely unnoticed, with higher-profile releases stealing the show. Take this review as a little attempt to change that.

Put on any other Horn record, and within seconds you’re transported to the majestic landscapes of the German countryside. Sole member Nerrath has the uncanny ability to conjure up with his music precisely the kind of images that adorn his covers, from the bright springtime view of Der Forst im Frühjahr (2004) to the darker hillsides of Naturkraft (2008). Distanz opens up a whole new approach for Horn with its dark, monochrome view over a harbour, the band’s first album cover to feature a human element. But as always, the image is the perfect match for the music. With Distanz, Nerrath continues to explore the darker sound-world that he began building on Naturkraft. For the first time, too, the themes of nature and landscapes move into the background, and Nerrath tries his hand at more human topics, like the place of cultural heritage in society (‘Borders, Lands and Shores’) and the lasting shadows of World War II (‘Die verlorene Rotte’).

Despite the change of emphasis, Distanz is very obviously a Horn album. The trademark guitar tone – one of the best in modern Black Metal – is as rich as ever, echoing through the tracks like rain upon a mountain ravine. Riffs are built around huge, majestic melodies that soar above the drums and vocals and carve themselves into your consciousness. There’s also a new (and downright dirty) thrash influence behind much of the faster riffing, showing that Nerrath is unafraid to expand upon the tried and tested formula.

Fans of Horn’s older work could be disappointed to learn that the stirring, almost folkish choruses of the ‘Alpenland’-days are now a thing of the past. There are still plenty of vocal melodies, but in a much grimmer, grittier style, sounding much closer to the usual screams than the clean singing of old. It’s the harsh vocals, though, that steal the show here, covering a whole range of tones and moods, and with just the right amount of murky delay. Hardly any compression is used, too, giving the vocals a dynamic expressiveness that’s rare in today’s extreme metal.

What makes Distanz such an improvement upon Naturkraft is in the variation of paces and textures within each song. Tracks are generally quite long, and the variety keeps thing compelling, making each song feel like a journey. Take the standout-track ‘Die Heimat, die keiner kannte’, which progresses gradually from furious blasting to an expansive, almost depressive conclusion that recalls Deathgate Arkanum at their slowest.

Distanz is a masterfully wrought slab of Black Metal from one of the most bafflingly underrated artists in the German scene. Make some time for Horn in your busy listening schedule, and don’t let this fine piece of work be forgotten.