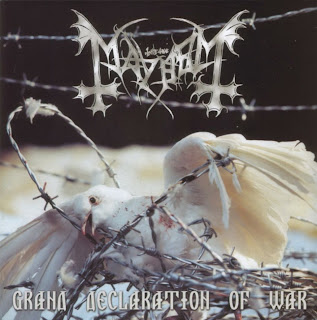 Mayhem’s much-reviled Grand Declaration of War turned 10 this summer. I was never quite sure what to make of this album, but its tenth birthday is a good reason to give it another chance. Some of the musicianship is jaw-dropping (‘A Time to Die’ being a standout), and at points the icy, post-apocalyptic atmosphere is right on the money. Not that it’s hard to find faults: the spoken-word histrionics are at best an acquired taste, and the constant stop-start approach never allows the record to gain any lasting momentum. But in its finer moments, Grand Declaration of War is an adventurous and thought-provoking step in the dark.

The decade since its release has seen a massive explosion of bands mixing progressive elements into their Black Metal, dabbling with electronics, and pushing the limits of technicality. None of this stuff shocks fans any more – along with shoegaze, drone and post rock, it has become part of the wallpaper of modern BM.

If this record came out today, would it be loved, hated or just ignored?