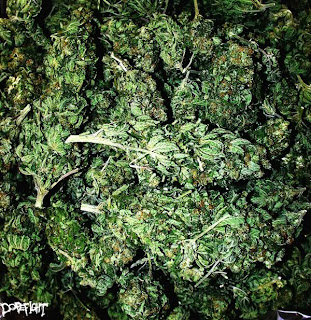 Having already done everything I can to thrust Brighton’s Dopefight on to the metal-devouring public, it makes sense to give their new record a good rinse and review. It’s proven difficult though. Every time I spin Dopefight’s full-length debut Buds I am totally absorbed. And when an album’s as direct, charming and thrilling as this one you want to listen to it, not fucking write about it. Since its release on August 2nd, every webzine and his dog has been rightly raining accolades on Dopefight. Being the first person outside the band to hear the album (so Ant [drummer] tells me) I have almost listened to it too much.

From the opening bleeting nod to the Almighty Horned One to the last folkish strums, Buds entertains and satisfies the metalhead’s constant yearning for great riffs. Twisting and turning through almost every form of sludge, doom and stoner metal that comes to mind, Dopefight at no point sound like a tribute to the obvious American acts that hold the monopoly on this arguably done-to-death genre. What makes Dopefight stand out is their unique and effective take on song writing.

Their credo seems to be focussed on getting incredibly catchy riffs into the song as soon as possible and then… maybe adding some vocals on at the end if they see fit. Take second track, ‘Leviathan’s Burp’ for instance. Kicking off with a riff that can only be described as “towering”, the song weaves its way through several gripping variations on itself and an awesome double guitar lead then dives into a chunky, stomping section: the only natural place in the track that could carry vocals. This ‘verse’ only lasts about 30 seconds then it is straight back to the How to Write a Fucking Awesome Riff 101. 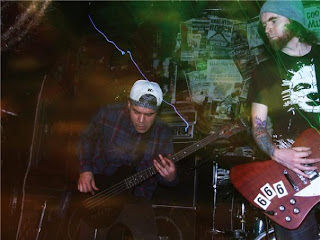 While critics may stand up and argue that this is a product of bad songwriting, I would have to disagree. Dopefight is without doubt a mostly instrumental band whose potency lies in their uncanny ability to write some of the greatest sludge riffs I have ever heard. Guitarist/vocalist Owen Karti has a knack for melody and excellent composure that rings true through most songs on the album. The formula works so well you will find yourself consistently reaching over to the volume dial, pumping it up for specific sections then letting your head-banging fly off the handle.

In contrast to the typical reigning sludge doom bands whose songs usually range anywhere between 8 and 15 minutes in length, Dopefight don’t fuck about. No single song exceeds 7 minutes, with a majority of the tracks being under 5. It’s another concealed weapon up Dopefight’s sleeve, the sheer quality of sludge on display is only emphasised by the short and sweet tracks that will have you pining for more as soon as each song is over. Buds stands up to so many repeated plays it’s unreal. 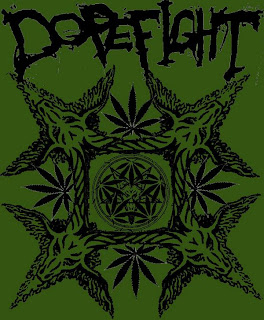 There are two dark horses on the album in particular and they come one after the other, demonstrating a microcosm of the variety that Dopefight draws upon across Buds. ‘Brighton Town is a Fuckin Whore’ (believe me, it is. I’ve lived there) is the shortest track on the album and betrays Dopefight’s origins as a punk band. Handing out heavy slabs of blasting sludgecore, Owen’s vocals spew vitriol upon the band’s home town.

Following that is ‘La Mano Del Demons’, the slowest, heaviest thing Dopefight have done to date. I recall being told that this was the band’s least favourite song to record, a revelation I find odd as it is definitely my top track. A droning menace of power chords form the introduction which gradually evolves into one of the most evil and sinister traditional doom metal riffs ever written [I’m prepared to stand corrected if anyone can find a more evil doom riff]. It’s so good I can guarantee that if Electric Wizard-shaped doom is your thing, you will repeat this song. The creeping doom is then brushed away by the bludgeoning sludgecore that Dopefight are so proficient in. But they know a good riff when they write one, and it returns a couple minutes later, triumphantly bursting with distortion and fuzz.

Buds is a damn fine work of sludge doom that stands up to the classic Weedeaters, Bongzillas, Buzzov*ens and Electric Wizards of the world. Drums are tight and punchy, bass is sturdy and rumbling, guitars are clear and melodic yet pack a punch with a massive wall-of-sound production. There are no lyrics in the sleeve, just weed, but you can be assured that Owen is pissed off and taking it out on you. Britain is taking over, go get it now because it will put a smile on your face. LURKER guarantee.