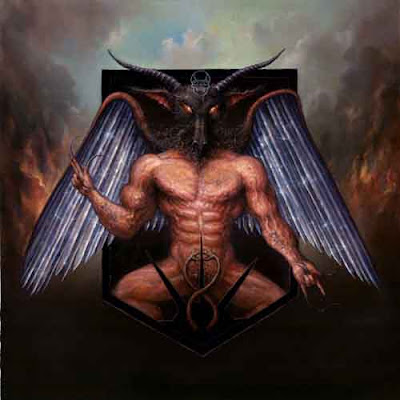 Diocletian was an emperor responsible for the most harrowing period of persecution of Christians in the Roman empire. A pillar of society then. Diocletian is a band responsible for the most forward thinking take on war metal to date. War Of All Against All takes the supremely constructed war metal epitaph of last years Doom Cult and injects a new found sense of barbarism and chaos to proceedings. Diocletian have always cut against the war metal grain with their uniquely tailored approach to the genre; gone are the bombastic basslines and heavily distorted, jumbled song arrangements, replaced instead with tempo variations and atmospheric nuance. This is a construction.
Album opener Black Dominion wastes no time in setting tempo or direction. No sooner does the sample preclude before launching into a heavily muted riff that could easily find a home on any Portal recording. The audibility of each instrument greatly adds to the effect of the music. War metal musicians take note: I do not care how much you think uneven mixing adds to an albums atmospheric experience, it masquerades an inability to compose atmosphere in the face of bands like Diocletian, whose adept production usurps even the throne of Revenge. I want to hear what the guitar is doing. Got that? (Do not get me wrong, I have always enjoyed the bombastic necrohell of Revenge and the driving epiphanies Sacramentary Abolishment are able to conjur, but Diocletian draw new blood).
As the barage continues across the scope of the album and the drums employ a host of rhythms, from the staple black metal binary blast of bass and snare to the restrained lashings of doom, a whole host of atmospheres take shape. Might Is Right slows down proceedings, employing what I consider one of the riffs of the year (see 1:10 in to the track). Desolate Earth is the shortest and fastest track on War Of All Against All and succeeds in raping, pillaging and annihilating with its stereotypically chaotic blackened war metal. Album closer Fortress Of The Unconquerable is over sixteen minutes in length. Breaking the track down, we find ourselves lurching through seven minutes of haunting, hypnotic metal. There are no driving sections of metal here. No throat burdened vocals. No promise of cliche at all. Instead, the track morphs in to a martial rhythm, underpinned by distorted spoken word before falling through ambience. It is claustrophobic and highly engaging.
The guitar tone throughout the album permeates my hazy memory with odd sections that sound identical to a lot of Seepia-era Portal. The richness of atonal harmonies against the ridiculous drum work of C. Sinclair perhaps? Maybe. Chances are this has more to do with the overall quality of musicianship on offer. Innumerable sparks of audial likeness can be found beneath the maelstrom of the first listen. Diocletian write riffs that haunt you for days (see 1:20 in Death Tyrant). The album never lurches in to the unremarkable ether of experimentation and instead adapts and transforms themes around aggression. A very large amount of variation that builds on where Doom Cult left off to [hopefully] inspire and infuse the next generation of war [metal] veterans to create something capable of topping this ritual. Any self respecting metal fan should be aware of Diocletian. The album is available now from Invictus Productions, along with the superbly crafted Doom Cult LP.
Purchase / Diocletian
war metal