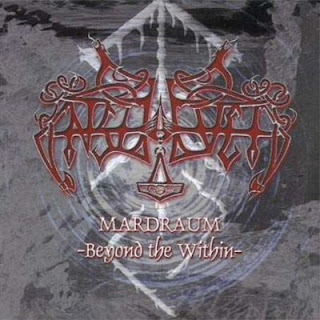 Thanks to Enslaved‘s latest opus, I’ve discovered that there’s at least some extreme metal that my girlfriend is happy to listen to in the car. Alongside Vertebrae, Axioma… has been in heavy circulation, and has turned car journeys into a chance to kick back with some huge tunes. Spurred on to seek out more car-friendly metal¸ I’ve been working through the band’s discography – most of which I haven’t listened to for years – and what a treat it’s been. One record has stood out more than all the others: 2000’s Mardraum – Beyond the Within (Osmose Productions). I rarely hear it ranked among the band’s best releases, but in a nearly faultless back-catalogue, Mardraum floored me in a way that no other Enslaved album has managed to.

With Mardraum, Enslaved took their first steps towards the blackened progressive metal of their current incarnation, and right from the album’s opening notes there’s a strong Floyd influence on show. But the band that wrote this album is a far cry from the Enslaved of today. The uncompromising energy and aggression of Blodhemn still runs strong through the arteries of Mardraum: the break-neck riffery on ‘Daudningekvida’ and ‘Krigaren eg Ikkje Kjende’ reminds us that even with 5 full-lengths under their belt, Enslaved were still a very young band in 2000 (Ivar B. must have been about 22). There’s a rawness to the production, too, that lends an extra ounce of ferocity and silences anyone who might equate a prog influence with going soft. This is definitely not an album for the car.

The best thing about Mardraum is its huge sense of adventure. No compromise is made for the ‘sensibilities’ of traditional rock or metal songwriting. Take opener ‘Større enn Tid – Tyngre enn Natt’, a sprawling epic that slides seamlessly through a long chain of movements in a wide variety of styles and tempos, while staying compelling from the beginning right to its majestic conclusion. Other tracks (e.g. ‘Ormgard’, ‘Æges Draum’) see Enslaved toying with a heavily Death Metal-influenced sound, which (kind of surprisingly) works fantastically within their progressive/Black Metal framework.

After this brave and diverse album, there really was no telling which direction Enslaved would head off in next. While I love the sonic territory they ended up exploring on their post-Y2K albums, the reckless unpredictability of Mardraum will always be closer to my heart.