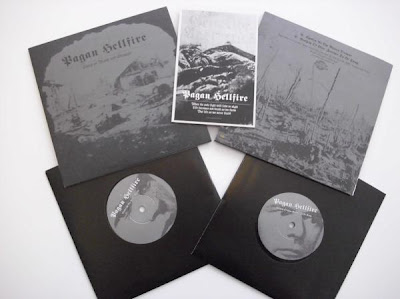 Here’s one that slipped under the radar. Canada’s Pagan Hellfire return with a new 7″, packed with cold Black Metal fresh from the battlefield (out now on German label Genocide Aesthetics). The driving rhythms and carefully-layered guitar lines of 2008’s Solidarity are as strong as ever, and will whet any fan’s appetite for another full-length.

‘Spoken at the Altars Distant’ is a solid enough song, with riffs that recall the better bits of latter-day Graveland (Fire Chariot of Destruction) and middle-period Darkthrone. It’s nothing, however, in comparison with the real stormer that follows. ‘Anthem of War, Forever to be Sung’ starts off in a similar vein, but is packed with memorable riffs. After a long stretch of blast beats and constant key changes, the song really comes into its own at around the three-and-a-half minute mark. We’re treated to a sequence of stunning riffs, killer shifts of rhythm, and some incisive melodic lead-work to round off. Like any 7″, it’s a short journey, but one you’ll remember for days to come, the grim refrain etched into your mind, War is forever, and forever is war.