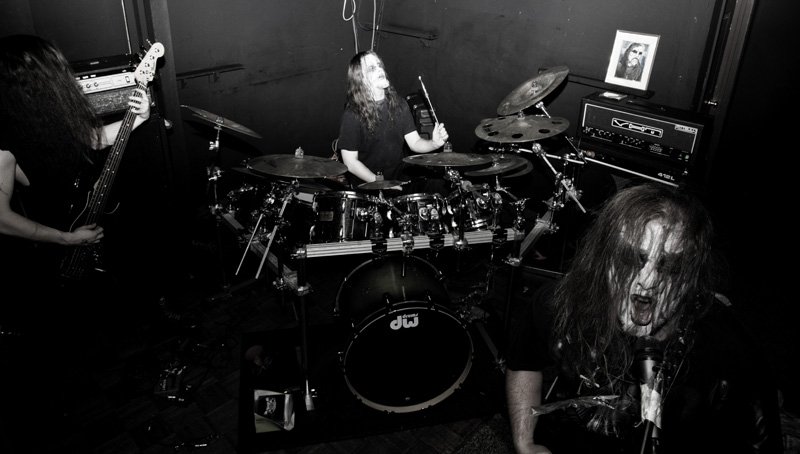 Necrite plays oppressive black metal from the abyss and delivers the annihilation of ALL life.

Oppression, bleak negation, unrivalled dementia from shadows thus far unperceived by human vessels. Necrite embody the black metal aesthetic of totalitarian eradication on unprecedented new levels. Eschewing any ties with modern day formulations of the genre, their unique variety of black metal involves a deep, almost profound understanding of the abyss. One could pinpoint the blinding sections of speed and instrumentation that coalesce sublimely with the most domineering sections of funereal ambience yet committed to tape (on a competing level with Weakling and the like) but that would miss the point. The atmosphere and blinding unity at the heart of Sic Transit Gloria Mundi sets the project on Deathspell Omega’s plateau of work.

Utterly transcendent black metal that sees staple genre instrumentation ascend beyond any sane concept of song writing or philosophy. Lovecraftian echoes of a chaotic truth; piercing through the veil of Maya, uniting mankind with the disgust it has borne. Sic Transit Gloria Mundi is victimising. It is the abyss. You will be subsumed. Even through the discord and atonal convocations they summon, when they hit a groove – they hit it better than most. It is far too rare that extreme metal usurps our expectations to deliver music that compels us too feel genuinely affected. A monument risen by the very subject it seeks to destroy. Not that the absurd is anything new to mankind, but this sublime piece of music is breathtaking. Simultaneously empowering and full of anguish, Necrite beckon a void familiar to anyone who has ever shown an intrigue in metal – and wholeheartedly brings the abyss to the territory of the tangible.

‘A Mass For The Harvest Of Death’ is a sixteen minute procession through chasm, cave and titan wave of denial and negativity. Stooped in atmosphere, Thrull’s vocal performance nothing short of utterly delirious. Wails and maudlin echoes interweave with the typical black metal iconography of arpeggio guitar passages and blasting drums. There are moments of ambient restraint at nigh on eight minutes into the track that borrow from the ethereal background noise you can find on some of Wrest’s work. This mammoth introductory component never becomes tedious – Necrite’s strength seems to lie in the ability to summon and maintain monuments of atmosphere without ever burdening the listener or resorting to synth-trickery.

‘Bereft of Hope’ see’s haunting, restrained ambience coined by some awkward, atonal chords and note patterns shoulder up against walls of complete pandemonium. Three minutes in and Necrite fall into blasting deconstruction, there is little in way of respite for the next few minutes as Necrite’s second strength becomes apparent. Any hardened black metal fan will account for the predictability and over trodden approach the bulk of the scene take to their song structure and musicianship. Necrite’s other strength can be found in the rampant unpredictability and non-linear approach to the structure of their audio. The first listen through ‘Sic Transit Gloria Mundi’ is a true experience. Your expectations will continually wrestle whilst trying to pinpoint and predict what is about to happen. The structure is completely contradictory in its ability to hypnotize whilst also continually surprise. A far cry from the mountains of hypnotic black metal acts that masquerade their lack of skill behind calls to hypnotic atmospheres.

‘Bathing Open Wounds With Shards Of Glass’ is exactly how it sounds. A seven minute freefall through claustrophobic night, unshackled hell, the eye of a black hole, the caverns of a broken mind. Layers of tortured, driving black metal that give us some tangible and ontological representation of the abyss Necrite have so aptly crawled forth from. Like the abyssal dark, largely unknown and unconsidered by the layman – here glorified and represented with unnerving abhorrence. It is fucking filthy. It is dangerous, encompassing, unique and unpredictable. Negativity as audio. The title track and the album closer ‘Worship The Sunn ((O))’ are mostly composed of ambient, droning passages. Occasionally a staple section of metal will push forth through the thickened debris on Sic Transit Gloria Mundi, but the emphasis remains heavily drone-oriented. Thus my only criticism is born: Necrite do the whole black metal thing so well, it pains me to see such lengthy and detailed sections of ambient drone take up valuable album space. The ambience hardly highlights or augments the more ferocious sections of cacophony either. Scroll down for our interview with Thrull as he elaborates on the inclusion of copious amounts of drone.

After a surge of extremely promising demo material, The Flenser present the projects first full length. Eager to further grasp the philosophical foundations that birthed this monster, LURKER assailed the abyssal shelves of Necrite to unearth more disgust, displeasure and absurdity than should be possible to handle.

How does a Necrite song come to be? How do you approach composition? 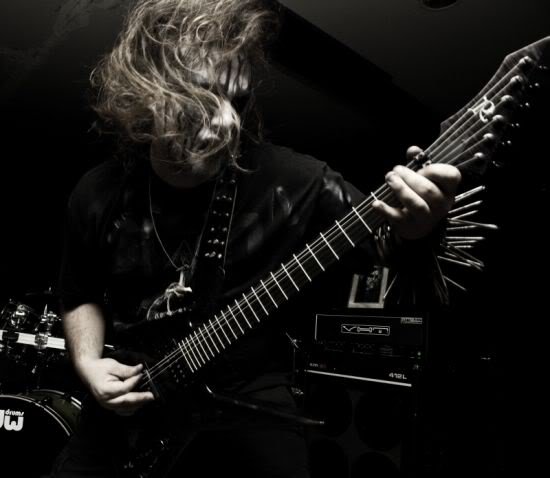 There really is not “one way” we approach making our songs. For instance the bulk of the track “A Mass for the Harvest of Death” was written while jamming at home playing with the really ugly chord that I liked. While the title track was something written more collectively as a band. The band has some big time “jam band” characteristics when it comes to how we write. We have tendencies to have noise jam sessions were we build upon a really simple idea and get lost in it. The lengthy drone intro is a great example of how we take a simple concept and expand upon it with layers and textures to give it an almost illustrative soundscape. That track sort of just fell together for us. A lot of the time we write our songs inspired by a noise that we just figured out how to make rather than a riff or borrowing from a song that we enjoy.

What is the purpose of Sic Transit Gloria Mundi?

The record is a loose concept album with two purposes. It is journey through the process of urban decay and an up close look at the parasitic lifestyle of mankind. The intent is to rub the listeners face in the filth we as a species have created. We like to think of it as a way to make the listener feel disgusted with himself for even being associated with the human race. All this is mainly covered in the first three tracks. Sic Gloria Transit Mundi is a transition in transition. This is where the record changes from painting a picture of human disease, to a vision of cleansing. It is a worship of Armageddon and the end of life in which everything is reset to a pure blackness. The intent here is to make the listener feel that their life is small and insignificant and that we all are but a spec in the cosmos. To give the feeling of absolute emptiness that is only achievable through death. Sic Gloria Transit Mundi is a musical journey showing the only way to cleanse the earth of the human parasite is to die. The intent is to show that death is where true beauty resides.

Necrite ‘delivers the annihilation of All life’. If Necrite’s purpose is nihilistic in its vision, why bother making music?


Why make music? Simple, it’s cathartic. It’s the only way I can escape from this hell hole without actually blowing my head off – hah! What’s with the hypocrisy? Why not kill myself? I am human; I value things like the lives of those I care for, the simple joy of making music, and other things that truly mean nothing. They just mean something to me. It’s all about perspective. Living to me is all about balance. Making music helps keep me balanced. As lame as it sounds, it’s a positive way of channelling negative energy.

There is a clear feel of hatred but also anguish running through the album. What does Sic Transit Gloria Mundi mean to the artist.

This kind of ties in to the answers of the previous two questions. To me it is a cathartic release. It is a way of displaying my feelings and views of life, people, nature and the cosmos. It’s like how a painter paints a picture to express something in an artistic metaphor. I do it with noise.

Your opinion on the following:

-Absurdism: This is something that has really hit home for me. I’ve always felt connected with the general sense of meaninglessness that this philosphy creates and I totally a philosophy the general idea that as a whole the efforts of humanity to find inherent meaning will ultimately fail. But what really makes this hit home for me is that it gives a feeling of humbleness. I am humbled that we are but a spec of dust in the scale of time and cosmos and our mere existence is insignificant in comparison. What can our lives possibly mean? I feel a sense of connection and meaning in feeling humbled by meaninglessness. It makes me realize that although there is no meaning to our lives as a whole, there is meaning in my life to me. It all comes back down to perspective. It’s that sense of being tiny and insignificant that makes me cherish the things that I do value all the more. It does not matter that everything I feel is important has no meaning in the big picture, because they matter to me. I believe that being able to view things from all perspectives is important to maintaining a sense of balance.

-Nihilism: A double edge sword, there is the pessimist in me that really connects with the whole believe in nothing, have no loyalties, and no purpose other than, perhaps, an impulse to destroy. Also makes great inspiration for lyric writing. Again it comes to perspective, and on the perspective of viewing humanity as a whole, it really seems to be the way to go. In the big picture I really think we should all die, but my human element forces contradiction within myself to find reasons to keep breathing

-Schopenhauer: Fucking brilliant. Read bits of the World as Will and Representation. I really really enjoyed his general view that humans are basically pigs and that there is no satisfaction in satisfaction. I agree, and I think it shows in today’s world plain as day and will continue to show as time progresses.

-Consciousness: depends on the day.

Sic Transit Gloria Mundi is out now and available from The Flenser.