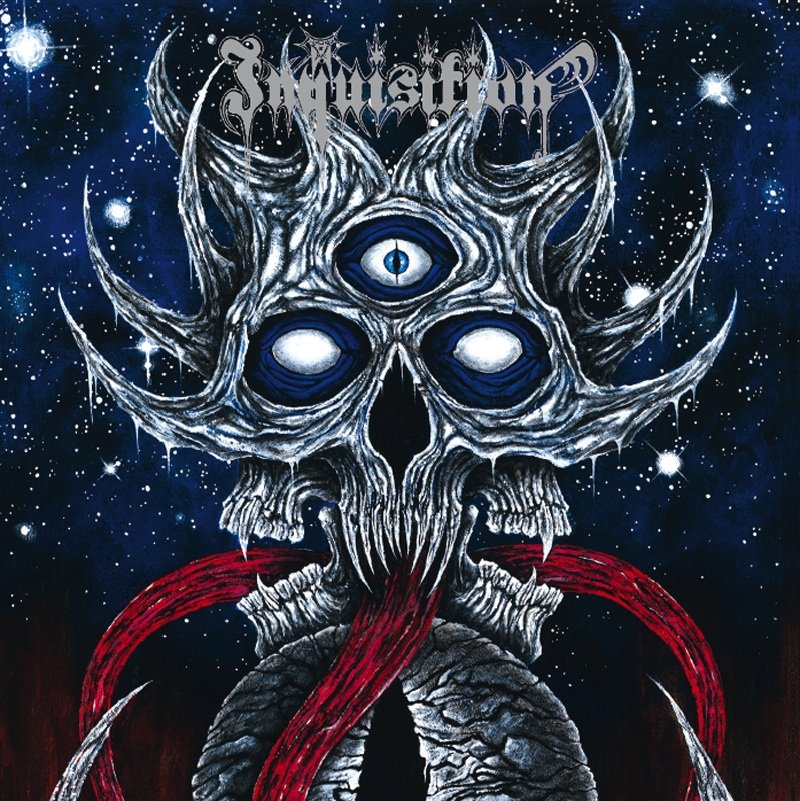 Ominous Doctrines of the Perpetual Mystical Macrocosm sees Inquisition strengthen their satanic workmanship to new levels of devotion. Purveyors of the finest satanic black metal you are likely to find, their majestic twist on the over-worn template of black metal combines faultlessly placed riffs with a stultifying sense of ritual and rhythm. Since the heyday of Into The Infernal Regions of the Ancient Cult, Inquisition have been hard at work forging, reinforcing and refining their weaponry. Over the duration of the bands prolific career, the music became darker and heavier. Greater emphasis was placed on anthemic, truly engaging metal satisfying all the regressive, primitive and base attributes of man. The riff became the almighty convocation of the dark lord and the majestic invocations of Inquisition took on a life all their own.

This time around, a much thicker production helps propel the music. Downplaying the treble and granting the guitars a pinch of bass makes Ominous Doctrines of the Perpetual Mystical Macrocosm much more refined than Nefarious Dismal Orations. All trademark Inquisition meme’s in place, album opener Astral Path to Supreme Majesties wastes no time settling into a blasting Immortal like tone before Dagon’s unique vocals bring the whole package home. A great acoustic bridge with medieval styled acoustic guitars much in line with a similar acoustic element included on The Initiation, as well as a none-more-metal guitar solo, help develop ritual elements to the music. Truly precise, driving metal that journey’s through the astral plane to cosmic wonder. There is a scathing feel of devotion and inspiration throughout the album that leaves you empowered and delirious – I guarantee this album will have you nodding along for the entire duration.

Inquisition always were one for samples and in truth, there is no better way to set up atmosphere or purpose in a track than through a well placed sample. I am fairly sure they keep sampling the same film/actress over different albums, but have no idea WHAT or WHO that might be (see again The Initiation on Into The Infernal Regions of the Ancient Cult for a reference point). [EDIT: Just been made aware that the samples are from a film called Inquisicion]

‘Lucifer – punish your enemies oh lord of the night! Destroy them all’. Queue fast, razor riffs and pummelling drums. Command of the Dark Crown continues down the trancelike, satanic invocation route. Eventually we are treated to a mid paced riff as Dagon’s renowned croak recites verse and hymn.

This is expertly composed black metal from individuals who have been on the left hand path for the duration, know the shortcuts and do not intend to depart any time soon. There is a semblance of majestic beauty residing between the hard-hitting, raw and cacophonous sections of totalitarian attack. Desolate Funeral Chant invokes a distorted arpeggio based riff that completely transcends any base black metal value. It is astounding: this record is a monument constructed and evoked for Satan. It is an attack on the narrow-minded and the weak. It breathes fresh air into the astral revelations hiding in the dark corners of the cosmos. A great sense of ritual and worship that commands as much aggression and power as it inspires awe and wonder.

If you have enjoyed any of Inquisition’s back catalogue, then you by and large know what to expect. Ominous Doctrines of the Perpetual Mystical Macrocosm is Inquisition’s most cohesive, intense and well delivered album to date. This time around, vocal duties are extended beyond the ritualistic croak commanded by Dagon to include clean vocals – most typically to summon an aura of worship as well as guttural invocations on Across the Abyss Ancient Horns Gray through more sombre moments. Nowhere is his unique croaking style more apparent than the chaos of Crepuscular Battle Hymn, which switches between marching orthodoxy and all out war. Musically, Incubus’ effort excels all previous Inquisition material. The drums help to direct the album, set the tone and often offer up interesting and new drum patterns – in truth they seem as varied as the guitar melodies, yet more proof Inquisition’s evolution involves the band as a unit. A great juxtaposition of the fast with slower/restrained styles fuels the atmosphere. Stylistically the album is balls to the wall raw black metal. However, there are enough nuances and riffs to keep you occupied until the next Inquisition hits.

Those who do not know and accuse bands like Inquisition of regression and stagnant ideas are clearly missing the point. Dagon & Incubus remain pure in vision and in heart. They do what they do well, without bullshit. An imposing obelisk of cosmic proportions for Apollyon – Inquisition continue to remain the most relevant orthodox band still flying the war flag of traditional black metal.

The album is available in America through Hells Headbangers Records, with a scheduled European and vinyl version in the works. Expect an interview with the mighty Inquisition to hit LURKER soon, discussing satanic theology and the precepts revolving around the new album.