Recently, there came a gentle rapping, rapping at my chamber door. Death Agonies and Screams put together a bundle of this new Wyqm record and the Sunshine SS 7″. Firstly, the aesthetics and packagings of both releases is immaculate. Wyqm looks great on red splatter vinyl and has a monstrous full colour cover that suits the music’s oddly technicolour approach to orthodox black metal far too much. Sunshine SS comes with A3 poster, insert and sticker – with the most pervasively slapstick cover I’ve seen in a long time. Both projects don’t seem too bothered about using the internet to promote their wares – in fact, information was so sparse – I am thoroughly excited to present to you two new, underground and unheard of releases that require your immediate consideration. A vinyl only label that enjoys putting a well packaged release together – and from what I can tell, all projects being released are stellar. Wyqm play hateful, despondent black metal – brewed in the caverns of an isolated mind, as unique as it is orthodox and entrancing in its ability to surprise.

I am not usually pro-drum machine when it comes to my metal. I outgrew the whole hypnotic element bands like Xasthur and Velvet Cacoon perfected so well and was left with a blank canvas when it came to drum machines in black metal. Blut Aus Nord being the only exception I have come across to date that completely superecedes the rule beyond any expectations. Wyqm use a rather orthodox sounding drum machine to beat out rhythms and reverberations throughout Portrait Of Spectre – the monotonous, repetitive thuds complimenting the raw, lo-fi nature of the recording. The guitars are thin and layers are minimal, and contra to your preconceptions – this works really well. The monotone drums cascading behind strings of a shaded, distorted guitar.

A thicker guitar tone in production would help beef up the overall effect of the music on offer yet Wyqm showcase interesting riffs and quieter nuances to musicianship than I have come to expect from underground black metal. Guitar is definitely Wyqm’s stronghold. The variation in patterns throughout the album is also quite astounding. Aside from the blasting binary, Darkthrone high-hat clash and generic four by four; Wyqm introduce a number of bizarre beats into the fold that are so very black metal, but so very rare in an over-saturated scene. If you can get your head round the monotone beats, there is a lot of melody and structure to enjoy.

At times I am reminded of a more directed Draugar recording. Where Draugar tracks had no direction or purpose, the stop-start sections of monochrome metal herein sit and develop with the jangled acoustic frameworks and subtle synth brackets squashed between beatings. All the hallmarks of the USBM sound are intact – Leviathan’s cacophony and Malefic howls, yet there are moments of promising clarity where Wyqm showcase’s his own take on USBM. All tracks are un-numbered and completely dehumanised, but the third track is the best of the album, where a bluesy lead guitar unveils the skeleton of a riff brutally orthodox yet so melodically unique in nature it leaves you gasping for more. The drums fit tidily and seek to highlight the guitars and vocals – the closest Wyqm comes to a trademark sound reminiscent of a younger, more melodic Nachtmystium.

The orthodox appeal to happenings on this splattered vinyl has a lot more to do with aesthetics and atmosphere than it does the music. The more spins Wyqm gets, the more I am impressed, the more I can tolerate the monotony of the drums and the more I appreciate the black metal contained within. The riffs are absolutely killer and completely unique. In the rare, nestled moments between outbreaks and blasts – guitar lines hook and weave across samples, above and below restrained synth passages and break new, refreshed atmospheres prepared for the bombast ahead.

Overall, a promising sophomore effort. I would like to see Wyqm developing his tracks a little more, greater emphasis placed on production and drum programming perhaps. There are some stellar standout moments that occur throughout the un-numbered album that sound uniquely their own, the ever evolving canon of USBM. This release is vinyl only – so I can’t imagine Wyqm whoring himself out over every internet blog for any small amount of attention or positive reception. Simply put, this is a tortured vessel committing his bastardised sense of reality and society to audio, most likely as some form of catharsis. Hateful, dehumanising, and freshly orthodox in surprising and unique mannerisms (just listen to that pummelling riff at the end of side A). Promising. Very promising. A Wyqm track can be streamed over at the Death Agonies and Screams Myspace – although it is from the debut which the label also released, you get the idea.

Sunshine SS – Throw My Brain Against The Wall

I fucking love this. Throw My Brain Against The Wall is total hardcore punk straight outta the 80’s. Featuring members of Kakistocracy and Who Killed Spikey Jacket?, this limited splatter 7” (which comes with a poster, insert, sticker and tongue-in-cheek cover) is Black Flag all over again. Yes, yes – how many bands have done the Black Flag thing to death. Fuck off. Hardcore has never particularly interested me, but this is just straight up fun. Listen to the title track on the http://www.myspace.com/deathagoniesscreams. Snotty, straight up punk that reminds me as much of Black Flag as it does the Dead Kennedys – impossible to hate. 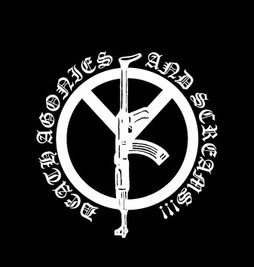