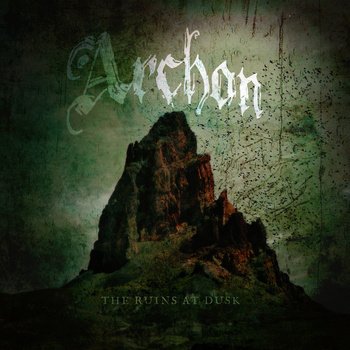 What do you get when you mix some of the greatest doom and sludge acts of all time? A heady brew of Archon is fucking what. These New York acolytes of all things doomed wear their influences on their sleeves, but when those inspiring sparks include whiffs of Grief, Electric Wizard and Asunder, it matters so very little.

Archon’s debut, The Ruins at Dusk, showcases some top notch doom metal. Four long tracks carve a tunnel through smoke-filled adolescent bedrooms, to the primordial temples of Sarnath and hurtling psychedelic trips. It sticks to the hallmarks of pure doom admirably but rather than feeling done-to-death, it’s a refreshing yet suitably putrid breeze. The respectful nods to the elders seem to resurrect the Electric Wizard of old: y’know, when they actually played slow… And the amount of Grief in here is just a thrill to listen to, definitely one of the most sorely missed bands of the scene.

A whole host of musicians appear on this record. None of them well known in the slightest, but it’s as if a circle of friends decided to finally put down that bong and fold away the D&D map to make a truly devastating album. Performers slide in and out of the tracks in a revolving door style, bringing a unique touch to each song. This is most obvious in the vocals, ranging from the manic shrieks of the opening track to the gut-wrenching, borderline death metal growls of ‘The Hymn of Mendregard’. There’s also a brilliant exchange between male/female vocals that make Kylesa’s Laura Pleasants sound like a whimpering pup.

Rifflord Andrew Jude appears to orchestrate these utterly doomed proceedings and is credited with writing all the music, despite the ever shifting line-up. He’s got some tricks up his sleeve for sure as opener ‘Helena (Ruins at Dusk)’ sluggishly proves. As the feedback subsides, the track drags itself through some of the most sinister, creeping riffwork this side of Sabbath with evil leads that can only be described as the soundtrack to your impending doom. After 8 minutes of suffocating gloom and simple yet inspired transitions, the track opens up into a trippy stoner wonderland of playful cosmic noodling.

‘Nature is Satan’s Church’ steps up the tempo ever so slightly with a healthy dose of palm-muted chug thrown in. The rhythm lurches through hefty blocks of metal into even more joyous stoner atmospherics with a startling vocal performance courtesy of Rachel Brown, straddling the grey area between Grief’s despondent cries and Dystopia’s barely contained fury. 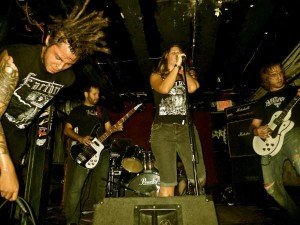 ‘The Hymn of Mendregard’ is, for lack of a better word, terrifying from the word go. A bestial roar is accompanied by pleasantly Grief-esque scales before launching full force into call and response gang ‘shrieks’ and ripping guitar solos. And Jude shows off his ear for awesome riffs once again with swarthy, bottom-end heaviness as he pilots the song into its death throes.

At 21 minutes long, closer ‘The Fate of the Gods’ is an aptly epic ending to a colossal album. A restrained, uplifting blues line builds and builds into a euphoric climax of exploding amps and shattered guitars. Bass drones drift lazily under the chilled licks, subtle progressions and delay-soaked guitars, until it all comes to a head in a starcrossed battle of improvisation and dexterous soloing.

The Ruins at Dusk is a magnificent attempt by a new band to crowbar their way on to the international doom/sludge scene and the amount of spins it’s seen at our end is testament to a successful mission. It’s not reinventing those rustic doom metal wheels but, as doom fans will attest, it’s got nothing to do with startling originality. Haters, as they say, are always going to hate and Archon are an affirmation of the genre’s legacy as established bands lose their edge and treasured acts fall prey to the dreaded hiatus. Basically, do you love doom? That’s great, because you’ll love this record. The Ruins at Dusk was released on October 31st through Dark Matter Recordings but you can name your price for a download here.