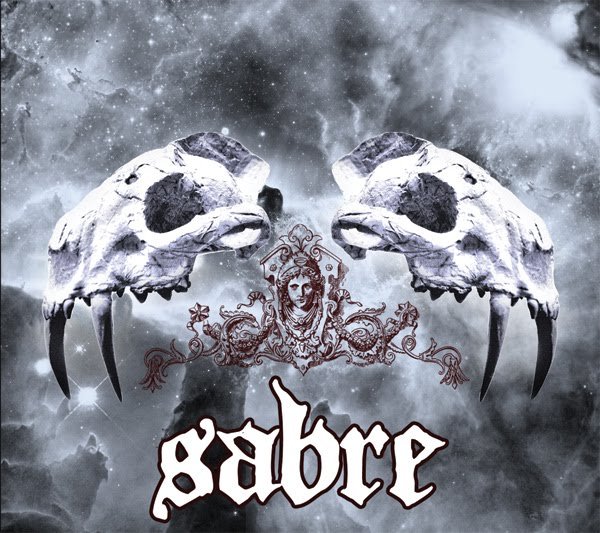 (While reading this review, give this track a spin in the background! Sabre – Black Water.)

After one year spent honing skills, refining skull-sludgery and peering endlessly into the abyss that is so vividly captured by these doomophiles, Ohio’s Sabre unleashed their first full length through Pact Ink Records earlier this year. Nurturing a sound that sweeps across traditional doom, modern day sludge and even hardcore strained vocals, Sabre stand out as a worthwhile alternative to the relentless assault bands like Black Cobra have come to spearhead. Slower and perhaps more traditional than the aforementioned, Sabre’s debut is a throttling hothouse of pummelling riffs, innovative sludge, fist-pumping vocals and deep, heavy doom.

Album opener ‘Astral Convergence’ is a long introductory homage to the riff. One dirty, elongated hook that distils the discord of Grief’s guitar tone with Electric Wizard’s stoner gaze. Utterly irresistible to any seasoned metalhead, let your head roll. ‘Condescension’ unearthes a more traditional arrangement before the vocal disposition so at home in bands like Grief and Black Cobra transforms the worship to new plateaus of bass amplification. The fact that these tracks have seen the light of release on earlier demo’s is usually off-putting – but the reformation and attention to intensity that decides whether a sludge band sinks or swims has been pondered, and the rocking low end is met graciously by a welcome reimagining of how tracks progress.

‘Black Water’ commences as a gruelling, almost catatonic crawl across bass, guitar and drum. The drums soon develop to combine a characteristically low end sludge riff with double bass drumming more akin to blackened death metal. Revelling in the mayhem, vocalist Brian sounds truly possessed at the 2:40 mark. The primitive death metal vibe throughout suits the constant shuffling between mammoth riff and mammoth grind, and I can only hope their future material is instilled with this kind of cacophony.

Revealing punk influence, ‘Josiah’ sounds like a Black Cobra interpretation of a Discharge track. Chase is a talented drummer, weaving and directing Sabre in directions the majority of sludge outfits never really consider. An unrivalled number of inspired binary sections take hold throughout, perfectly suited to the myriad of influences Sabre wear proudly on their band-patch-riddled jacket sleeve. ‘Automaton’ haunts the waking gaze as a lone guitar accompanies spoken word and a static ambience wavers in the ether. Over the duration of this nine minute center piece, tensions build and the sense of abyssal bleakness tumults to fever-pitch levels. Admittedly, a lack of true intensity at any point in the track leaves the listener wanting more. After four opening tracks of possessed, inspired sludge reckoned metal, the sparse nature of ‘Automaton’ left me feeling alienated and cold.

No matter, since ‘Unearthly Body’ sees the band return to their strong point. More sludge coated in the swamp mire of cthulu’s cult. Great rays of dissonant guitar manifestations shade the sludgy mire in a tense atmosphere perfect for a vocal delivery straight from the throat. There are times when Sabre get swallowed up by their own rhythms and it becomes a powerful, engaging listen that the listener cannot ignore (see 1:55 into ‘Unearthly Body’). Lets hope future releases see longer sections of this sort. Album ender ‘WhoreInstinctsDefined’ is more of the same possessed, inspired and unique sludge-drudgery tainted with the vices of a thousand different genres. Dropping a few cosmic references had me instantly interested, the song arrangements had me instantly banging my head and the tenacity and ideas in play had me utterly convinced. Pick up the CD from Pact Ink Records, or alternatively give the album a listen over at the Bandcamp page, where you can pick up a digital download for $5.