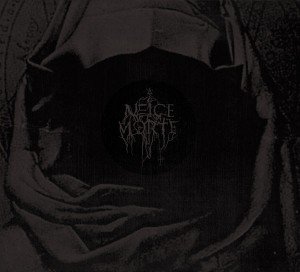 France has a tradition of producing fiercely independent black metal and Neige Morte, from Lyons, are no different. With their self-titled debut, released earlier this year through Aurora Borealis, the violent three-piece summon everything from murky soundscapes to atonal sludge and hardcore-informed blasting, all within 35 minutes of challenging black metal experimentation.

It’s taken a while to come to grips with this record and many repeated listens are necessary, preferably while lying on the floor of a pitch-black room. The opener, ‘Reflexe Post-Mortem’, is genuinely unnerving. A frosty wind howls while electronic drones rumble beneath. Sighs and whispers of vaguely human voices conspire within the darkness, broken by groans, blood-spitting coughs and the odd cymbal splash. It’s a simple but effective formula: prepare for self-doubt and loathing as you sink through the floor into some sort of vast torture house.

But before the nightmarish scene threatens to completely engulf, sudden crushing bass and discordant guitars smash through the crepuscular ambience and launch into a primitive yet sinister riff. The whole thing seems to suffer from an extreme existential ague as the drums flail, vocals spit bile and guitars struggle forward. It’s as if the creators are almost prepared to give up, but not before documenting their hatred for the world. Its punkish ferocity will trigger a breathless panic but respite can be found through sections of haunting noise.

The gale shows no signs of slowing for ‘Tout Sonne Faux’ (Everything sounds wrong) as a rigid drumbeat drives onward. It’s a fitting title as the hideous, doomy bass wrestles with guitars for new contortions of ugliness. But in an instant, everything breaks down and maddened shrieks shake the speakers. The disturbed listener is then absorbed in a disorientating and ethereal dream as layers of reverberant guitars fade in.

The relative calm is short lived however, as ‘Need Some Air’ induces yet another panic attack with two minutes of hardcore primitivism. Terror and doubt is the only agenda as it slides into the ritualistic ambience of ‘Fausses Victimes – Vrais Bourreaux’. These eerie passages contrast perfectly with the unhinged chaos of Neige Morte’s metal side, revealing an interesting level of minimalist experimentation. The beleaguered album is put to rest by ‘Bourbier’, a rousing number that shows the band at their most straightforward with their signature discord giving way to a godly Norse riff. But the band reminds that ‘straightforward’ is not their way as the track moves into disturbing half-tone scales. As is custom, the proceedings are closed with the voice of the goat.

Neige Morte’s first release is an achievement. The band’s attack is primitive and abstract, but there is a definite experimental slant to the sound that speaks for yet another incredibly unique act from one of black metal’s finest outposts. Hypnotic and repulsive in equal measure, Neige Morte comes highly recommended. Sample a couple of tracks here and order from your relevant webshop.