Bristol’s Hateful Abandon are one of the most exiting and unpredictable bands in today’s underground, and 2011 may well be their biggest year yet. After 2008’s genre-despising masterpiece Famine (Or Into the Bellies of Worms) (Todestrieb), the band laid low for a while, but are now resurfacing with two new albums and some live performances in the works. We caught up with frontman and multi-instrumentalist V/M to find out a bit more about what’s in store.

You’ve been speaking prophetically about a complete change in direction for Hateful Abandon. How would you describe what you’re trying to do as a band in 2011?

We’re just going to be doing what comes naturally, not really changing direction as such. We always said that it would be great play live if we could find a way and always looked to find other people to fill our vacant positions on stage (E.g. on ‘Famine’ there was 2 guitar parts, bass, keys, vocals and drums). So we’ve had to find a way of playing HA with just the two of us. One way of doing this and keeping it ‘live’ was to strip our sound down to keys and vocals. We’ve been playing ‘live’ in the studio for about 9 months or so now and it really works as a two-piece. It feels really fresh and exciting, so the album after the new one will be written entirely like this in order to play the songs live. 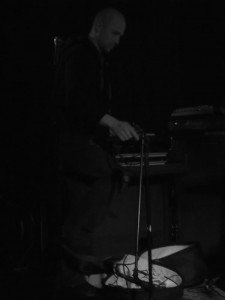 I had the impression from your updates last year that you’d got quite far with a follow-up to Famine…, called Money Bastard Soul. Is that all completely scrapped now? Is any of the recorded material (like ‘Buried’, which is still on your myspace page, or the Cabaret Voltaire cover) ever going to see the light of day?

Yep. We’ve done a 360 on this one. We’re going to be releasing that album this year (very soon hopefully) under the name of ‘Move’. Sometimes when you write music it can a get a little stale and you become detached from the message and the sound. We were so excited about the new way of writing we just thought ‘Fuck it, let’s scrap that bastard and write a new album.’ Late last year I was pissed and stuck on the demos and it blew me away. Tom mailed me the next day and said he’d done the same. It really is a great great record and we now can’t wait to release it. ‘Money Bastard…’ will be the name of album number 3…hopefully out Autumn 2011.

Your sound on Famine felt as if it had developed organically, rather than a conscious attempt to blend genres. How did the new one come about? Are there any artists in particular that have influenced it?

‘Famine’ was pretty much improvised/jammed in 3 sessions. No direct influence as such, just ‘photosynthesis’. Obviously some other influences bled in more than others. You know which track I mean (Painters Rope *cough). I find it a little bit embarrassing to be honest. BUT FUCK IT. It’s a good song.

What kind of subjects have you been exploring in the lyrics to your new songs?

How has it been taking Hateful Abandon to a live stage? Have you had a good response from audiences? 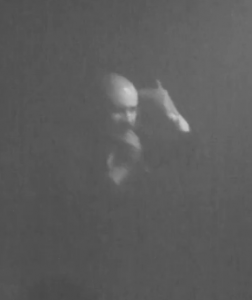 I think the audience was pretty scared to be honest. Well, at least shellshocked. I got pretty angry/worked up. I thought I’d ruined it to be honest because I just can’t pretend everything is nice and we’re going to play some nice music for folk. Fuck it, it was what it was and what will be. We’ll be playing in London with Urfaust this Autumn.

Are you playing anything off Famine, or is it all new material?

All new brother. That’s the plan. I’m thinking of trying some old tracks though. We’ll see.

From the live video of ‘There will Never be Peace’, you can definitely still hear a bit of metal in there, at least in the vocals. Do you guys still listen to much metal? What modern metal have you most enjoyed lately?

Yeah, I listen to a ton of Metal. Not really fussy about genres to be honest I just like music. It just came out Metal because I was angry. It wasn’t like that in the studio.

Between the two of you, you’ve covered a fair bit of musical ground in the different projects you’ve been involved in. How does it feel listening back to the stuff you’ve done in the past in Abandon, Basilisk and Swine? Do you feel any continuity between your past and present music?

V/M – I only listen to HA and Tom’s projects. Don’t listen to Basilisk and Abandon. Hard times mate. I was in a bad way really. Too difficult.

You said in an interview that you always used to get drunk before recording stuff for your past projects. What role does intoxication play in the writing and recording of material for Hateful Abandon?

We get drunk yeah. I don’t think it’s important as such but more because we’re having a good time doing HA and we want every session to be a celebration. We’ve done literally hundreds of cans these last couple of years. 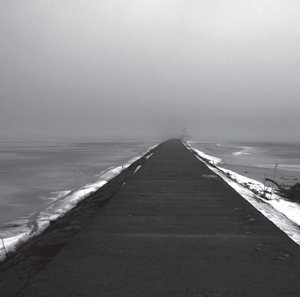 The photography in the artwork for Famine captures the feel of the music perfectly, especially the front cover image. Where was it taken/where did you find it? Can you divulge any plans for the next record’s artwork?

That was taken by Håkan Jonsson of Total Holocaust Records of a pier in Sweden. The loneliness of the piece really struck me. Bleak as Hell. Next artwork…ooh you’ll have to wait and see. It’s one of the most powerful images ever…not going to ruin it now though. Wait.

The lyrics are a huge part of what you do, and I’ve always wondered what your song ‘Painter’s Rope’ is about. Would you be willing to shed some light on that?

V/M – I had a dream where I was responsible for painting the night sky black by heaving a pulley for 7 hours as punishment for my earthly sins.

When can we expect a new release from Hateful Abandon? And do you have plans for some more live shows soon?

I Would like to say Spring/Early Summer. Fingers crossed…we have a couple of shows pencilled in like the once with Urfaust in October. But nothing else written in stone. Keep an eye out!

Finally, in interviews you both come across as huge music geeks (like us…) Please could you recommend a few records you love that we’ve probably never heard?

You may have heard these, I’m not the one for obscure records anymore. 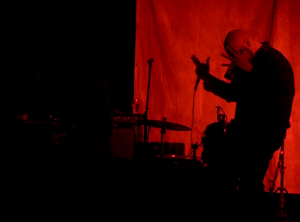 Killing Joke: – Everything up to and including Extremities.
Suicide: Fuck it – everything.
Pil – Metal Box/Flowers of Romance.
Vangelis – Bladerunner Soundtrack.
Autechre – Chiastic Slide.
Bosse – Echoes of the Forgotten.

Sorry for the wait. It takes time to Hate.