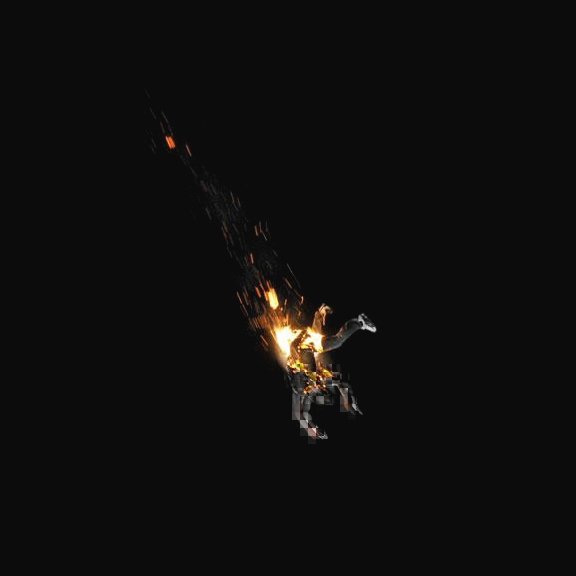 Wreck and Reference are redefining heaviness within rock music. In fact, on listening to the duo’s latest EP, Black Cassette, one could be convinced that the guitar’s 60-year reign may soon be toppled. The band has forsaken magnetised strings altogether in favour of a solely electronic palette, to utterly devastating results. Where similar projects like Life In The Dark explore misery in hushed ambience, Wreck and Reference’s despair is direct, violent and furious.

As dense and crushing as any regular sludge/doom cohort, Wreck and Reference rely on synthesizers, samples and heavy-handed drumming to shape vast, crackling chasms of drones and feedback into remarkably melodic and heavy pop. Pop used in the most sparing sense possible, of course. The band’s name also hints towards the methods underlying these brilliant creations.

A play on the 1892 treatise Über Sinn und Bedeutung (On Sense and Reference) by German philosopher and mathematician Gottlob Frege, their twisted take on his work is quite simple: Referencing through samples and noise, the band ‘wrecks’ whatever original sounds they began with and make it their own. When speaking to Ignat and Felix, it’s clear they know what they’re talking about, but the impenetrable concepts don’t end there. 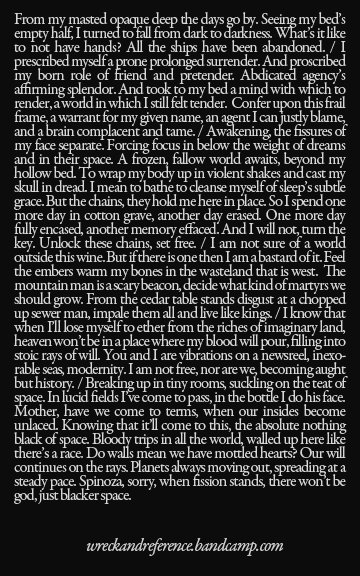 To quote the band: “The song lyrics often describe the darker components of existentialist philosophy including the non-existence of god and fated death. There is also a prevailing theme of determinism. Humanity lacks free will since it is chained to an inexorable sequence of physical and chemical events that perpetuate the organism and human reality to the abyss that is the end of all life. The psychological condition that results from these truths is one of absolute despair, alienation, and helplessness and the wasteland of sonic chaos represents the inevitable physical disorder that surrounds us.” Well, fuck yeah. Tickle your fancy? Their delivery will stun you even more.

Processed electronics chime tentatively on opener ‘All the Ships Have Been Abandoned’, only to be crushed into the background by ear-shattering blasts of noise. Strangely enough, there’s a prevailing tonal melody that the vocals tune into with a natural ease. With a laconic drawl, they remind simultaneously of LURKER favourites Religious Knives, Mount Eerie and Badlife, producing moments of both despondency and beauty throughout the record’s six tracks.

There’s also a persistent aural illusion generated by the sheer denseness of Wreck and Reference’s sound. On tracks like ‘Surrendering’, it’s difficult to accept that what you are hearing isn’t a guitar. The grumbling lower end beneath the tired, mournful singing sounds just like a bass but their robotic plod reveals that something isn’t quite right. And out of the serene ambience and soaring vocal lines of ‘Evening Redness’ an almost jazzy “lead” part rears its head, tricking the listener into believing a guitar is being played. But the jarring cut-offs soon make it clear these are again dexterous fingers on a keyboard. The sterile artificialness is fascinating. There’s no doubt that this music would work great with guitars, but Black Cassette proves that, when it comes to creating thundering doom, strings are not prerequisite.

For music of such monolithic intensity, it’s rare to come across some as catchy as this. Every song has a memorable aspect about it, a device that will keep the EP firmly in rotation for a long time. After the brief blast beat that introduces ‘In Chains, Awakening’, a pulsating drone surges forth creating order out of harmonic chaos, while the misanthropic lyrics snarl tunefully, before collapsing into a whirlwind of battered drums and kaleidoscopic sound. ‘Desire, Ether’ has a satisfying post-punk flavour to it; depressive, gloomy and resigned, it marks a counterpoint to the existential ire of the first few tracks. Proceedings are closed with a true gem in ‘A Lament’, where heavy shoegaze atmospherics trade off with menacing verses, harbouring a fantastic vocal performance that spits in the face of God.

This is obscure music that defies niche genre appeal: melding the slow, brutal weight that will catch the ears of metal fans; the shards of sculpted feedback and deconstructed dissonance to prick up the ears of noise enthusiasts; and the meticulously crafted assembly and honest, earnest delivery to grab the attention of admirers of the less obvious side of pop music. It’s music with no reason to remain obscure: elements diverse as to attract a broad range of genre purists away from their caves of orthodoxy, yet simultaneously a distinct uncompromising vision.  Available for free at the link below, we look forward to seeing the following this attracts, and how they develop from here, out of dark obscurity and into the light of the following they justly deserve.