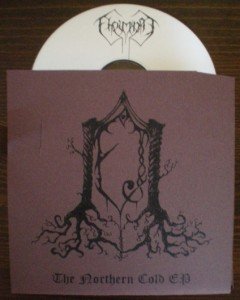 When I think of DIY I think first of punk, but really it’s as fundamental to Black Metal as any other genre. Beginning perhaps with Darkthrone’s infamous ‘Necrohell Studios’ (a 4-track), home-recording has been a common modus operandi, and over the last ten years – for better or worse – has become the norm. This has its obvious downside: the combination of Audacity, a drum simulator and sloppy, overly-distorted guitars is a popular but rarely successful recipe for metal. The ‘bedroom’ prefix has become a stigma, and rightly so. But this just makes it all the more satisfying when someone does a really solid job of 100% DIY Black Metal.

France’s Fhoi Myore are well on track to mastering the art. The Northern Cold EP is the first offering from their own, self-built recording studio, and (drummer Bress tells me) was the band’s attempt to teach themselves how to record in preparation for a full-length. The sound, in short, is great. Every instrument is clear and well-balanced, with a nice earthy texture. What’s best, though – and todays pro engineers should take note – is that there’s little compression on the drums and vocals, leaving lots of room for dynamics. A fine move.

Fhoi Myore offer a naturalistic brand of BM that reminds me a lot of Strontgortth-era Nagelfar. There are some tasteful acoustic pieces woven in and a lot of rain samples (which actually set the mood quite well), but the rest of the time Fhoi Myore deliver no-nonsense Black Metal. The material’s not all consistently strong: the epic ‘Orage’ packs in some bright, melodious riffing but is a bit too bloated and disjointed in parts. The standout track ‘Miist’, on the other hand, is a concise masterpiece, full of swift shifts of pace and some nice major-key moments that caught me off guard. (Hear ‘Miist’ and another highlight ‘Forest of Doom’ here.) The EP also includes an Ancalagon cover – which suits the band’s style well – and an acoustic version of a song in progress, ‘Songes Funestes’, which has a nice Drudkh-ish edge to it.

The DIY aesthetic runs right down to the artwork. The promotional copy I was sent came in a simple but smart hand-made sleeve (see above). And when the EP gets its official cassette release later this month, on The Northern Cold Productions, it will come with new artwork (see below), but still very much in keeping with this aesthetic.

The Northern Cold shows a good deal of promise, and I look forward to the full-length. Keep an eye on this band, and join me in a toast to high-grade home recording. 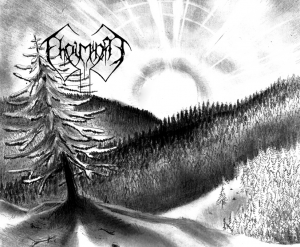