Much as I’d like to write post after post about new music, I’ve just not been feeling it lately. It’s not that 2011 has been a sub-par year so far – far from it – but right now the prospect of digging up some much-loved demos from the past seems a thousand times more appealing. I side with Fenriz in the view that demos can be at least as important as albums, and often capture an energy that’s lost in a proper studio. Over the next week of so I’ll bring before you my choicest rediscoveries. 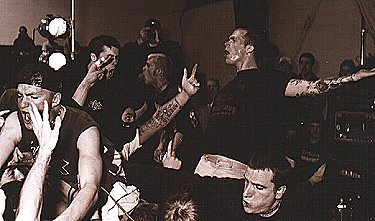 Today’s demo comes from Converge circa 1997. Recorded in the basement at Kurt Ballou’s parents’ house, these tracks gained the band a place on the Equal Vision roster and would eventually end up on 1998’s When Forever Comes Crashing. That record is infamous in hardcore circles for a miserable production job that completely saps the life out of the music (thanks, Steve Austin).* But in demo form these songs are utterly rabid: I’m sure the levels are well up in the red for the entire duration, but that only adds to the ferocity. Every instrument is crystal clear anyway; no complexities are lost in the maelstrom. Even the bass (handled by Steve Brodsky of Cave In fame) has a nice beefy presence. As for Jake Bannon, he’d always sounded inhuman, but here his vocals are downright terrifying. I don’t just mean the usual screams: the eerie ‘singing’/wailing and spoken-work passages are utterly deranged, a perfect complement to Ballou’s creepily dissonant picking patterns. Add on several layers of overdubs, a touch of echo, and you’ve got some of the coolest sounding vocals on any hardcore recording.

As on any good demo, the band sounds alive and in tune with itself. This music, for all its rage, is packed with subtle shifts in tempo, but Converge always manage to march as one. It’s a fine performance, and perhaps offers an even better snapshot of how they sounded live than you get from The Long Road Home DVD.

This demo was never properly released back in the day, but you can get hear it on the fantastic Unloved and Weeded Out compilation. If you wrote off that release as just a collector’s item, then you’ve made a mistake. It stands shoulder-to-shoulder with all of their full-lengths, thanks in no small part to these demo tracks.

*Apparently the 2005 re-release sounds a lot better. Anyone heard it?