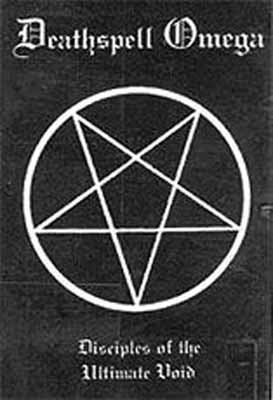 You don’t hear much praise of early Deathspell these days. It’s become popular, at least in reviews of their newer records, to write it off as run-of-the-mill Darkthrone homage and then dive headlong into arse-kissing praise of their more adventurous (2004-) stuff. But to brand their earliest incarnation as a mere ‘Darkthrone clone’ is way off the mark. Even their 1999 demo Disciples of the Ultimate Void has a lot more to offer.

Now I won’t deny that these guys learned a lot of their craft from Transilvanian Hunger, but what they’ve borrowed is that record’s keen sense of melody rather than a fetish for relentless blasting. No, the songs on show here are about as rhythmically varied as any Black Metal coming out in ’99. Witness how opener ‘Raping Human Dignity’ switches between its blastbeaten verse and the jaunty 7-beat measures of the chorus – the first sign, maybe, of the band’s later  inclinations. Hot on its tail comes ‘The Ancient Presence Revealed’, a killer black thrash jam with some crafty Voivod-ish tritone runs thrown in. My guess is that the Deathspell Omega of 1999 were worshipping Aura Noir’s first two albums as much as any Darkthrone release. And that’s no bad thing, right?

Perhaps the last two tracks don’t pack in quite the same momentum as the first, but the quality’s still high. Both songs are driven by swinging shuffle rhythms that are more Bathory and Immortal than Darkthrone, but still manage to cram in some melodious blasting and mid-paced romps to remind you that there’s more to writing good BM than trance-inducing repetition.

Maybe all this variety is just the sound of a young band finding its feet, but it works for me. If you’re looking for an 18-minute hit of raw and compelling BM, then dig up this old beast and show that sunny weather who’s boss.