With the gentrification of black metal at full tilt, it’s refreshing to hear Famine’s self-titled debut. The grotesque, squatting demon that leers from the cover art, wielding a blade forged of purest black metal, sets the tone for what is to come. Its cold eyes, lolling tongue and oppressive stature seem to invoke a tempting challenge for the listener. The band’s sole member, Worthless, is a cipher of sorts, taking a welcome step back from the personality cults that have afflicted the scene in recent times. The only information on Famine is as follows:

“Famine is occult black metal. Famine was founded in 2007 by sole-member Worthless. There is no claimed allegiance, no geographical pride, or specific spiritual or religious loyalty connected to Famine or Worthless. There is no proclamation or specific doctrine adhered to in these works that can be conveniently summarised and packaged for the purposes of contributing to the further deprecation of what has become a predominantly shallow and boring cultural trend.” 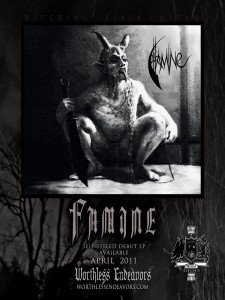 A breath of fresh air for such an odious, evil project. Taking its cues from the ghastly artwork, the music is a punishing assault on the senses. A resounding chasmal production is wound tightly around Famine’s raw rage, making the album a reverberant, consuming pandemonium from start to finish.

Opener ‘Adventus’ is a perfect introduction, playing a furious thrash riff off against the disorientating, whirlwind black metal of the refrains. Indeed, it’s not often one comes across such intricacy and technical ability within the context of a lo-fi record like this one, but the results are breathtaking.

For instance, ‘Praise the Witch’ catches whisps of Portal as guitars frantically scale the higher registers and drums batter on with inhuman speed, plunge back down into cantankerous rumblings and smash through warped, atonal leads. It’s like being attacked from all sides non-stop for 20 minutes. Likewise, ‘Oathless Sovereign’ blasts forth with a blistering malcontent – initially I played Side B first and couldn’t believe what I was hearing with this track, such is the speed and ferocity. But with further study, vicious riffs are relinquished by the inferno and form a satisfying chunk of offensive, Leviathan-informed black metal.

But intensity is not the only weapon Worthless utilises. ‘Enter the Temple’ revolves around driving percussion and one droning, miasmal riff accompanied by a hideous invocation and earth-shaking feedback, while ‘Amaru’ and ‘Liber Porta Lucis’ represent a more experimental and almost ambient side to the record – off-kilter pianos, shrill string sections and blaring horns all contribute to these strange compositions. The ritual is brought to an end with a ‘Curse’, which features an unsettling, strangled solo voice performance. Worthless’ vocals fit the record’s unique furore throughout, focussing on a distorted whisper that ranges from piercing shrieks to groaning chants.

Famine’s first statement is one of searing, insidious and violent black metal, something I’ve been longing to hear in 2011 without having to flick through my aging record collection. The 200-gram vinyl’s packaging and design is of utmost quality, and includes with it a large poster, a free download and lyrics with which you can decipher Famine’s purpose for yourself. Well worth the $19.99 from Worthless Endeavours. The label is evident of Worthless’ determination, dedication and hard work to get this uncompromising vision out to you, so return the favour and support the underground.