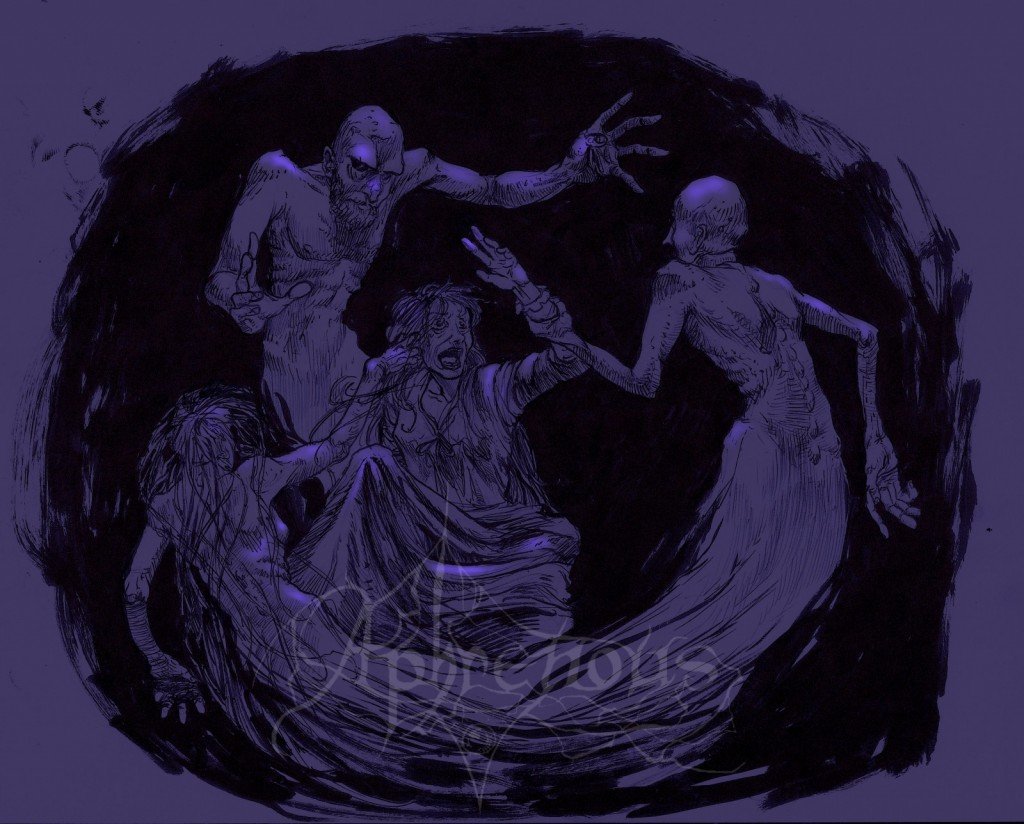 Aphrenous are, ironically, a breathe of fresh and icy air in this modern world of black metal.  Bands have developed beyond the point of drawing comparisons to the forefathers of the genre. Some new, almost post-black metal order exists where cascadian, transcendental and crossover tendencies serve to further the sphere of sound, emancipate feelings of stagnation and drive a genre filled with soulless clones onward.

For the most part, this is a beautiful thing. The trappings of black metal have a lot to do with the stripped down approach to the sound. The genre was founded on a denial of values, on a bare-bones approach to musicianship that is nowhere more apparent than in Darkthrone‘s seminal Transylvanian Hunger. This development into multi-faced facets of sub genres and unique identities then is down as much to the listeners and what they take from the music in terms of personal experience as it is to the artists that expunge themselves into the music. The staggeringly wide stage that black metal has set is testament to the success of the ideas of these forefathers.

Still. Every now and then a hearkening to the Old Gods’ return. Bands releasing manifestos with their music in order to be understood is interesting and all, but sometimes one cannot help but miss how this older canon expressed its point solely through the music. Who could deny the majesty of Graveland’s Following the Voice of Blood? Or the allure encased in Burzum‘s eternal homage to mother earth via Filosofem? How about the driving, epiphany provoking work of earlier Blut Aus Nord? Or the relentless cacophony encased in Hate Forest‘s back catalogue? These are timeless moments in the history of black metal that hit as hard today as they did in the 1990’s.

Aphrenous are the embodiment of this spirit. Their music is a refuge from the modern paradigm at play. Haunting arpeggios reveal vast waves of reverence and majesty. There are bellows and ululations unheard of since the days of Isengard and early Ulver. All modernities have been usurped in favour of the old school spirit, which is delivered with unflinching belief and conviction in the monument that is ‘Ravaged by the Incessant Scourge of Deception’. Haunting passages of ambient set tones and atmospheres I considered dead and gone after the initial demise of Burzum. There is a melancholy purpose that underlines the music and solely the music. There is a belief in play that black metal can still make us shudder under its most base of proponents. Aphrenous deliver what I consider to be one of the records of the year here.

Oh how I have longed to behold this timeless spirit once again! The album can be streamed and purchase for a nominal fee over at the Aphrenous Bandcamp page. Below LURKER attends a correspondence with members J. and N. to reveal influences, ideas and purpose behind this obelisk to the second wave.

– The undeniable reverence to older rulings of black metal in your works is the focal point of the music. What is the reasoning behind this? Do you think these sounds can still be a valid force in a genre dominated by almost post-metal tendencies?

J.. Most of exceptional black metal albums that have been released were done during late/mid 80’s and up to the mid 90’s, and my goal of the project is to create music that I personally enjoy to listen to and honor the pioneers. If it weren’t for the early bands to form the backbone of the musical genre and to gain a following, there would be no starting point for newer bands to incorporate the recent post-metal influx in black metal.

N.. Both of us are big fans of the genre, and I know that personally, I like a great deal of modern bands but I always return to the “classics”. Those are the bands/releases which will always remain the blueprint for modern bands to build off of. We both hold many of the same older albums in high regard and had a desire to make something more in that vein.

– What are your opinions on more modern movements in black metal circles? Is modern black metal losing touch with its heritage?

J.. Some of the more avant-garde black metal bands like Angst Skvadron and recent Blut aus Nord albums are refreshing and unique, but the more recent U.S. take on black metal is starting wear thin. A return to the early days of Grand Belial’s Key, Judas Iscariot and Absu in the American scene would be greatly appreciated.

N.. I like plenty of bands in the modern circle (Deathspell Omega, Aosoth, Nyktalgia, The Ruins of Beverast, etc.) but many of said bands are those whose sound harkens somewhat back to the “old guard” of the genre and I feel it’s why I tend to find their music more successful than others; because of this incredibly evident understanding and homage to the history of the genre. It’s easy to tell a band made up of well rounded fans of the genre versus one composed of those who are merely hopping onto a bandwagon.

– Beyond the obvious circles of influence at play on ‘Ravaged by the Incessant Scourge of Deception’, is there anything else that has shaped the sound of Aphrenous?

J.. The Netherlands’ Funus self-titled release spawned the idea that would become Aphrenous. Outside of them, Virus and its predecesor Ved Buens Ende… played a minor role and will play a bigger role in an EP that will be our next release. Outside of the metal realm, neofolk and classical guitar style had a small part.

N.. The challenge of creating a piece of music that would successfully evoke the type of atmosphere and tell the type of story we wanted it to convey was a big impetus behind Aphrenous for me personally.

– Can you tell us about the recording process? The whole recording sounds as at home on your bandcamp page as it would have done on analogue cassette circa 1995.

J.. Writing and recording of the album spanned over the course of nearly two years. Everything was digitally self-recorded in a minimalist fashion out of convenience and in keeping the essence of what black metal was founded upon.

N.. Yeah, everything was recorded out of convenience firstly, but also in keeping with what we felt would get us the final sound we wanted. We love the traditional “black metal production” sound and wanted the release to have that air to it but didn’t simply want to prescribe to JUST that. We wanted it to have it’s own, unique sound too within these specifications.

– One of the things that appeals to me about older black metal is its ability to convey so much through the music alone. Bands like Liturgy would be lost without their manifestos and explanations of the music. So, is there an underlying ideology at play in Aphrenous or does the music do the talking?

J.. Aphrenous is a representation of madness that consumes the mind.

N.. There is a definite direction and story we have planned out for Aphrenous and for it’s next release(s).