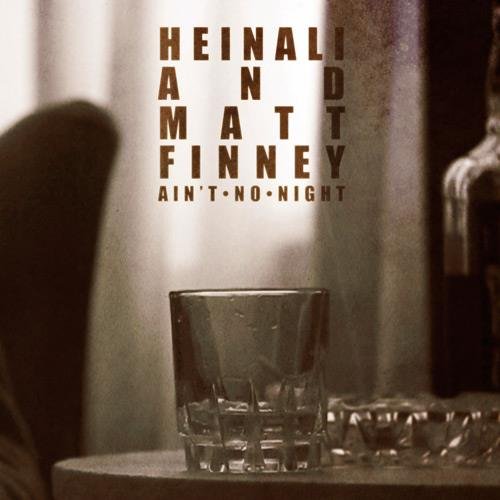 It’s not like we have to explain who or what Heinali & Matt Finney are any more. We interviewed them about Ain’t No Night almost five months ago and have followed their exploits closely from inception. Since last year’s debut, Conjoined, the duo have barely kept quiet, releasing the acclaimed Dreamcatcher EP earlier this year. Now with a second full-length on the horizon, and yet another in the pipeline, it’s plain to see that the prolific artists behind this project are carving themselves a niche of brilliantly consistent ambient drone, despite the leagues between them.

But it’s really not that easy to classify the depth of Heinali’s vision. Whether it’s the mournful industrial post-punk of ‘Tinderbox’ or the doom-blues of the title track, the Ukrainian composer has all bases covered – but not before he’s thoroughly coated them with his own unique hues. Musically, Heinali has outdone himself on Ain’t No Night. His uncanny ability to create order from the ambient chaos prevalent on the record is most evident in the opener ‘In All Directions’. Here, dense static and hypnotic drones build upon each other, gradually collapsing under the weight to give way to breathtaking structure and melody, almost as if stumbling across a beautiful view while out walking in the middle of nowhere. Another highlight is the album’s centrepiece ‘Ain’t No Night’, a groaning blues monolith that hearkens as much to the Twin Peaks soundtrack as it does to ballads of dissent from the Deep South.

That brings us to the poet, Matt Finney of Alabama. He emits frail sighs of resignation when Heinali subdues his surging walls of sound. Tales of betrayal, loss and moral decay filter down through the scintillating noise, with all the emotional potency found on earlier releases still firmly intact. A lot of pain and suffering has gone into Finney’s work, dark experiences he elucidates in our interview that I do not wish to repeat here. The background of these individuals is important nonetheless, as it leaves Ain’t No Night reeking of a desperate, moving honesty. Finney’s redneck drawl has now been tidied up somewhat, with a boosted clarity absent from the debut. Now each word reverberates clearly and with meaning, their delivery nodding towards the surreal diatribes of Slint. But whereas Slint’s spoken word explored dreamlike observational poetry, Finney continues his legacy of brutally true-to-life proclamations for a civilisation in decline.

The band considers Ain’t No Night a contender for album of the year and they may not be far off the mark. It may lack the vicious riffs and blasting aggression of most projects that feature here, but the album’s blissful atmospheres and compelling storytelling have been buried firmly in my mind for a long time now. When compiling your end-of-year lists, do yourselves a favour and do not let Ain’t No Night pass you by. Decide for yourselves whether the painstaking effort heaped into it is worth the accolade, because it’s sure to be among 2011’s best. The record is available for pre-order now from Paradigms. Below, director Freddie Lloyd reprises his relationship with the band in a delirious juxtaposition of colour, light and darkness.