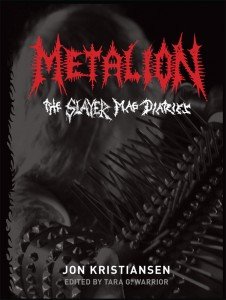 Since getting hold of Metalion: The Slayer Mag Diaries (Bazillion Points 2011), I’ve hardly been able to put it down. From its earliest days Jon Kristiansen’s Slayer zine was a weird and wonderful creation, and to be guided through each issue and the surrounding events by the author himself is a real treat. You discover how many painstaking hours went into the composition of each page, how the best part of each day was spent corresponding with hundreds of bands and pen-pals around the world. For someone who occasionally jots down a few thoughts on a webpage, discussing music gleaned from another webpage, this is chastening stuff. What’s more amazing is that this guy was friends with everybody, not just his close friends in Mayhem and Dissection: international legends like Tom Angelripper, Bill Steer, Mick Harris and Sadistik Exekution all saw Metalion as a close friend and, it seems, looked up to him too. His close involvement with the early Norwegian Black Metal scene is probably what will sell his story to most readers; but it’s a great credit to the man that he tells the tired old story of Mayhem and Burzum in a genuinely engaging and moving way.

Now this is a really long book, and since I’m barely half way through I won’t attempt a proper review. Instead, I’ll touch upon the chapter that has struck me most so far: the eleventh issue, from 1998. The content is still 90% Black Metal, but the tone has changed dramatically in the three years since the previous issue. The interviews with big Norwegian names (especially Bård Faust and Ulver) show that they feel no connection whatsoever with the contemporary scene. This issue captures the demise of the early scene, in the proper sense of the word. Now we see the main players of old striking off in new directions or recycling earlier ideas; neither side is taking inspiration from the new brood of bands. By far the best piece is the Ulver interview, conducted by Michael Moynihan in 1997, halfway between Nattens Madrigal and the infamous Themes from William Blake... The whole interview is gold, with some interesting insights into the futility of Black Metal’s anti-Christian stance: even if you weed out one herd-mentality religion, before long another will pop up. I’ll leave you with the band’s most interesting response, which can speak for itself:

Do you consider yourselves to be aligned with Black Metal in music and ideology?

ERIK – ULVER was born out of the Black Metal scene, and on all of our releases so far except “Kveldssanger”, there can be no question about our alignment with Black Metal music. Our statements have also born evidence of related attitudes. However, bearing in mind the way ULVER has developed over the years both musically, lyrically and philosophically, the label is becoming too limiting. 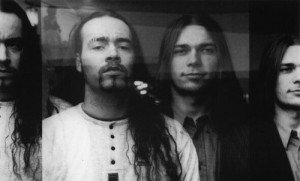 But what is behind Black Metal “ideology”? The source of Black Metal is VENOM – beer-drinking, base-minded rabble, icons of Heavy Metal idiocy. The essence of Black Metal is Heavy Metal culture, not Satanic philosophy. Just look at our audience – the average Black Metal record buyer is a stereotypical loser – a good-for-nothing who was teased as a child, got bad grades at school, lives on social welfare and seeks compensation for his inferiority complexes and lack of identity by feeling part of an exclusive gang of outcasts uniting against a society which has turned them down. And with Heavy Metal as a cultural and intellectual foundation, these dependants on social altruism proclaim themselves the “elite”! Hah! Could it be more pathetic?

We feel it is about time now to find a more mature form of expression and seek a more intelligent public better qualified to understand the philosophy behind our work. It is not flattering to our artistic vanity to see that the only people interested in what we are doing are brain dead teenagers.

GARM – In certain ways I still cherish Black Metal as it was definitely the decisive factor for both my interests in music and the darkside. But since the early days I have ripened quite a bit, and find it difficult to see myself as a part of this movement because a lot of Black Metal people follow very fallacious and narrow concepts of life. I seek to be impeccable, and this can only be achieved through open-mindedness. This implies interests outside what is common in the above circles.

A lot of abominable developments have happened in the scene since I was truly involved, and I am sad to say that most of the people who now dominate this milieu are but a bunch of conformist alcoholic losers with no genuine feeling for the concept and searching for an easy way to feel initiated into something eccentric and special. Black Metal now makes ignorant and unconfident young people feel warm and cozy, and functions more as a crutch for individual weakness than anything else. Now isn’t that cute!


Anyone in the States should get hold of this book from the publisher, Bazillion Points. For the rest of the world their postage costs are prohibitively expensive, but if you don’t mind buying from Amazon, it’s currently very cheap.