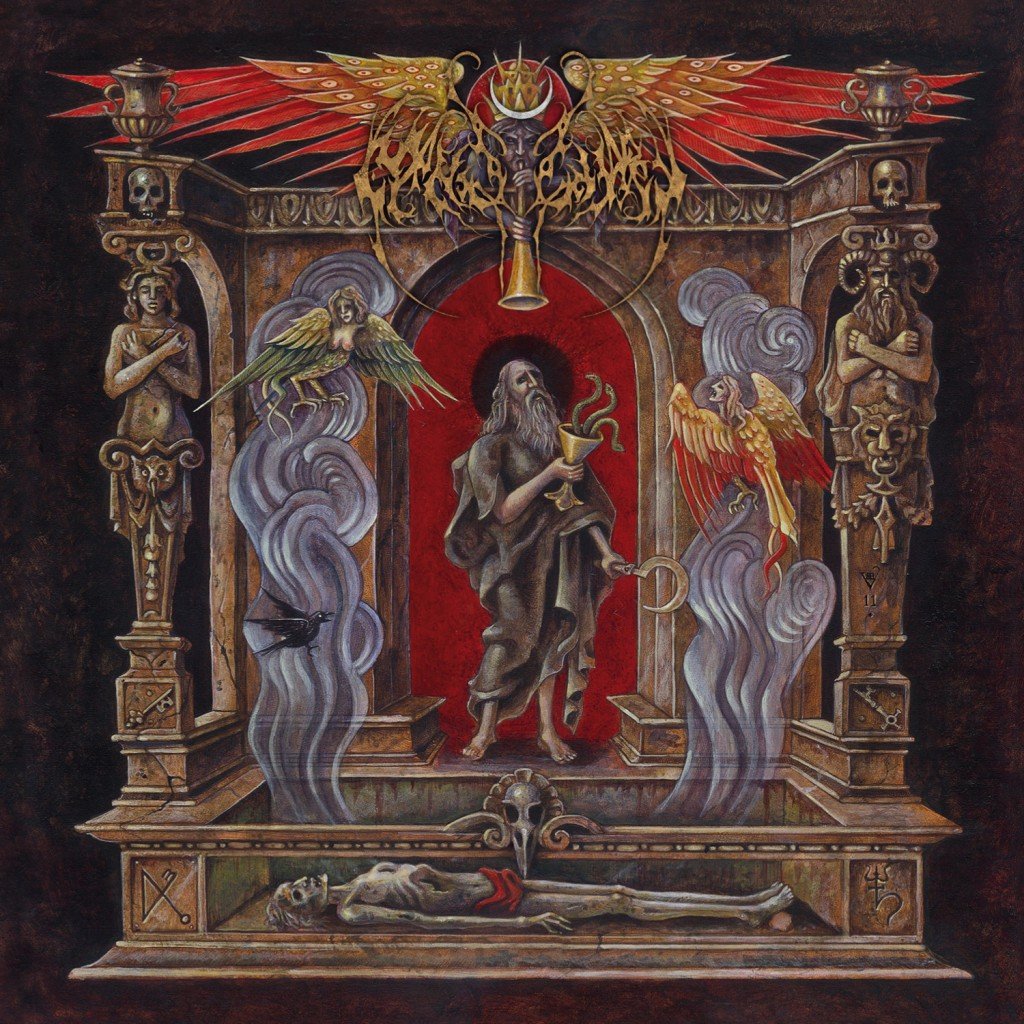 The sheer scope of sound commanded by these renegade visionaries is rarely paralleled by other bands who fail to live up to the technical supremacy or occult reverie that haunts each Nightbringer release. There is no middle ground about the music of Nightbringer. Apocalypse Sun bought with it a chaos of such force that many found the constant barrage of speed and ideas too much too take. Death and the Black Work, a study in the mysteries of death, channeled a slower, more doom like mantra to proceedings. ‘Hierophany of the Open Grave’ is Nightbringer’s crowning achievement. Theistic chants, acoustic guitars, new melodies and progressions together with greater dynamics within tracks transform the exercise of hearing a Nightbringer record into an experience. Everything here has been diversified.

The band has come a long way since the days of ‘Rex Ex Ordine Throni’ and ‘Death and the Black Work’. Honing ones craft is a mark of survival in extreme metal and Nightbringer have succeeded in raising our consciousness year in, year out since their debut full length dropped in 2008. ‘Hierophany of the Open Grave’ is a microcosm of these advancements. Sprawling, duel guitar interplays have been extended to new levels of pernicious rivalry as one constantly seeks to out joust the other., Melodies and the far reaching depths commanded by this somber duet seem more direct than before, with every element of instrumentation accentuated to conjure thoughts and feelings of complete awe. The machinations of this highly evolved unit represent the human embodiment of chaos in aural form.

The atmosphere on display is overwhelming. Dark, diverse and disorientating, the music of Nightbringer constantly enshrouds the listener in thick swathes of grim, apocalyptic tradition. The whole movement acts as an esoteric monument to the potent, preternatural causes of existence. An explanation of death birthed in the shrouds of its quintessential structure: haunting blackness, the promise of pain and the eternal strife as the essential condition of human life.

Furthermore, ‘Hierophany of the Open Grave’ marks a massive jump forward in the dynamic nature of shifting tempos and song lengths. Shifting with utmost ease between dynamics of blasting hellfire to restrained, obombrous beats is something Nightbringer command with terrifying conviction on this release. A welcome change of ideal for those that grew weary of Nightbringer’s mode of play on Apocalypse Sun (the unforgiving assault of triggered drums and tremolo picked guitars) or the slow, vast chasms on display in ‘Death and the Black work’. Not a middle ground, but a furthering of sound and understanding as a band unit.

The effective component that is so often limited to ‘shock’ and ‘awe’ in even the better black metal projects is usurped in favour of a fuller medley of feeling. To say that ‘Nightbringer was created as a conduit for our contemplations on the mysteries of death as it is understood in the tradition of the art magical’ is to say that they are finally closing in on their goal. ‘Hierophany of the Open Grave’ now includes a distinctly humane component missing from previous releases. Reflection on the mysteries of death, its effect on the cognition of human understanding. The music of Nightbringer now has a thematic element above and beyond that of pure observation, there is a component that will embrace, effect and corrupt the listener.

Those that found themselves in the gulf between Nightbringer’s monochrome approach to sound and the walls of self-assured text Naas Alcameth frequently presents in interviews may find deeper seeds of justification sewn into this new release. ‘Hierophany of the Open Grave’ is an evolved effort in the study of the mystery of death and the typical humanistic responses provoked. Every instrument, sample, idea and texture present seeks to further Nightbringer to the grand conjuration of death distilled in aural form. ‘Hierophany of the Open Grave’ will transform this once labeled mediocre black metal project into a genre forerunner, comparable only with the higher echelon achievements of Deathspell Omega. Purchase.