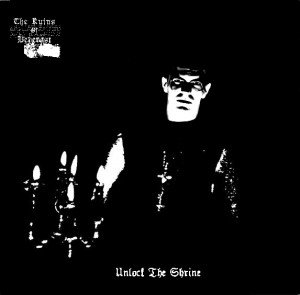 The Ruins of Beverast may be one of today’s most forward-thinking Black Metal outfits, but when ex-Nagelfar drummer Alexander von Meilenwald started the project back in 2003, he was keen to return to the absolute basics of the genre. The Furious Waves of Damnation demo, released that year, was a blast-heavy homage to classic Darkthrone, an unassuming forerunner to the adventurous full-length Unlock the Shrine. Despite its new experimental leanings, Unlock the Shrine still contains one small tribute to Beverast’s former idols. At the end of the title track Meilenwald works in the lead riff of Darkthrone’s ‘As Flittermice as Satans Spys’, transposed up by a fifth. Hear the original riff below, followed by the Beverast version, and then the original once more, taken up a fifth (for any doubters out there):

It’s the same riff, right down to that jangly minor second over the third note. The only change Meilenwald has made is to add one final throwaway fifth at the end of every bar:

The Ruins of Beverast version (transposed to C)

This was the fourth in our ‘Secrets of the Tune’ series. If you missed the first three, catch up here, here and here.