Text by Rob, photos by Rich.

After several gig-less months, I couldn’t have been more excited by the prospect of seeing so many excellent bands in one night. Having spent a very metal afternoon exploring the medieval holdings in the British Museum, Rich and I headed over to the Purple Turtle in Camden primed for some fine riffs, beer and more riffs. 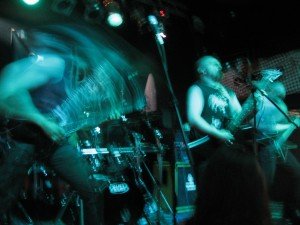 You know you’re in for a great night when a band as good as Cruciamentum is the opening act. The English death-metallers have experienced some dangerously high levels of hype on the back of their ’09 demo, and I’m pleased to say they deserve every bit of the praise. Their songs are good enough on tape, but live they have a whole other level of power. ‘Rotten Flesh Crucifix’ (a standout track on the demo) stole the show: when the band settled into that crawling mid-section, gut-wrenching levels of heaviness were reached. Future audiences, consider yourselves warned. On top of the demo material, we were treated to two new songs that bode very well for the band’s next release. As far as the crowd were concerned, the set couldn’t last long enough, and I doubt I’m the only one tempted by their gig next month with Sonne Adam. 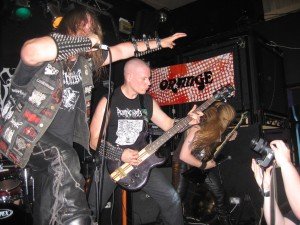 Cruciamentum was followed by London’s own Scythian, bringing their belligerent thrashing death to the live stage for only the third time this year. The band had clearly built up a lot of steam over the months since their last gig, as they tore into their set with an unrelenting fury, frontman S. Vrath prowling the stage and inciting the crowd to join the battle chants. From right up front, where we were standing, it was hard to pick out all the riffs, as a lot of the detail was lost amid the sheer volume. But from the few videos that have been doing the rounds, it’s clear that the sound and the performance were spot-on. Let’s hope they return to the stage soon, once fans have soaked up the new vinyl release of To Those Who Stand Against Us. 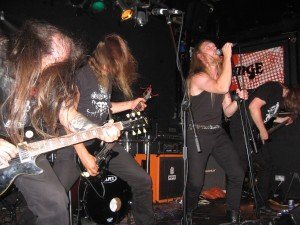 Up next was Finland’s Lie in Ruins. Neither of us had heard of them, and going by the name alone I was slightly concerned that a dose of deathcore was to follow. Thankfully I couldn’t have got that more wrong, and we were treated to an assault of top tier Death Metal, dished out with all the filth and glory of the classic Finnish acts. With songs this strong (proof here) and a live show this tight, it’s a downright mystery that a bigger label hasn’t netted them. 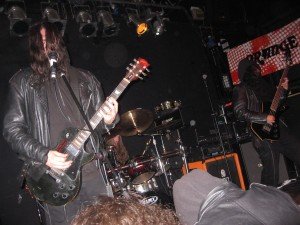 Having just heard three sets of incisive, fist-pumping Death Metal it was strange to think that we’d soon witness Negative Plane, a band better known for their eerie psychedelics and chaotic, echoing guitar work. There’s a risk with busy, effects-laden music like this that it will come across as sloppy, or just a blur of delay. Luckily for us, Negative Plane are masters of their trade, and delivered a crystal-clear rendition of their finest material. I hadn’t realised how much fingertapping there is in Nameless Void’s playing, but his right hand hardly left the neck of his guitar during the set. Definitely an interesting take on Black Metal guitarring. Nor could I have anticipated the audience’s response: having steadfastly headbanged their way through some choppy Death Metal, the crowd was now moshing to Negative Plane. What. You might not guess it from the albums, but live this band brings quite a lot of energy: as soon as that dancey beat in ‘The Number of the Word’ kicked in, people went crazy. And fair enough. This was easily the best metal gig I’ve been to in a long time, and pretty sure Rich feels the same. Here’s to the next one.