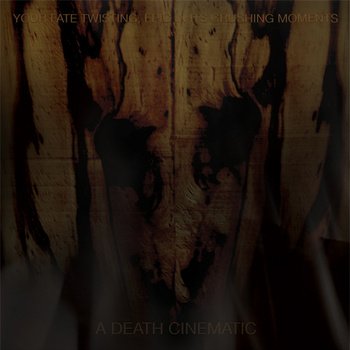 Over the years, LURKER has had the privilege of speaking with many artists we’ve come to admire. Cult legends and complete upstarts have both contributed at length to these musty columns, giving personal insights into the deepest inner workings of their art. But among them, one project remains an enigma. Despite an interview one year ago with A Death Cinematic, the latest EP release – Your Fate Twisting, Epic In Its Crushing Moments – only renews all the questions left in the wake of that discourse.

Who is behind all this? What possesses them to make this music? How can one person run an entire multimedia outlet by themselves while, presumably, holding down a nine-to-five? This lone soul operates Simple Box Construction, a record label of sorts, but something he only describes as “the visual side of A Death Cinematic”, where the design, art, manufacture and printing of every release is painstakingly crafted in house. Amid such a determined DIY ethic, the questions of identity and method dissolve as they become part and parcel of A Death Cinematic, especially when the musical journey begins.

It is so easy to get lost in Your Fate… The somniferous droning, which has become a staple of the project’s sound, just oozes long-dead Americana, painting vivid pictures of decaying ghost towns and tumbleweed drifting across Nowhere, USA. It is these intense visions that provide the impetus for A Death Cinematic. Being an ambient entity by definition, movements can only be discerned through the very gradual unfurling of each piece, though these minimal tweaks to the layers have the potential to catastrophically alter the initial soundscapes. As a result, the listener will easily lose themselves in multiple music-induced daydreams, only to be roused later by unfamiliar, searing noises far removed from the calm of the outset.

The effect is slow burning and barely accessible, but for aficionados of true ambient music, and those already accustomed with the work of A Death Cinematic, there are a great many treasures to be mined. The oscillating drones and gentle guitar tremolos that initiate the colossal title track are soon swarmed and dragged beneath a growling tide of feedback as the wounded twang of an electric guitar soldiers on with its bluesy improvisations. Each layer seems to meander unpredictably with a mind of its own, completely free of time-signature constraints, owing to the lack of percussion throughout not only this EP, but the discography. Nevertheless, in spite of the ever-shifting terrain, the guitar parts all seem to single-mindedly drag the piece onwards to its demise. And “drag” is right; there is a vague despondency here sorely lacking in even the most dismal funeral doom bands.

After a brief blast of bass-heavy drones as the interlude, closing chapter ‘In The Tumbling Dawn Light, Their Eyes Fall Frozen Through The Mist And The Rain’ ends the EP in suitably mournful style. The track has appeared before as part of the Der Wanderer über dem Nebelmeer compilation, lovingly curated by long-time lurker Niels Geybels of Sequences. The idea was to collect pieces faithfully inspired by the painting, and A Death Cinematic’s effort does just that. Hissing noise shimmers like the prismatic spray off the waves before the wanderer, and through the mist emerge fleeting glimpses of land mass, represented in audio by the hushed, repetitious guitar phrases that dominate the piece.

The project is shrouded in mystery, but Your Fate… provides the listener with everything they need to know about A Death Cinematic. This is just one man with an amp, a guitar and an obsessive need to create that borders on lunacy. Nothing else really matters. Pick this one up; to fully grasp the matter at hand, the physical side must be thoroughly examined too. As with all Simple Box Construction releases, the packaging is the product of meticulous and beautiful design work. This one is mounted on a wafer-thin wooden sleeve, which inside includes a poem unique to each disc, typed on an ancient typewriter. There are also water decals of a skull-and-bones sigil included with the CD. Clearly, these small hand-made touches are very important to the artist, and they give the release an inimitable feel – so far, we have seen nothing else that can match the unified aesthetics of A Death Cinematic. Post-rock that, for once, we can really get behind.